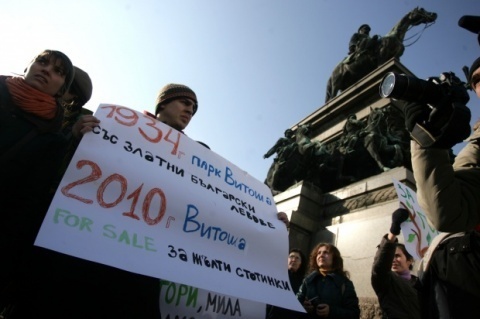 Bulgarian environmentalists and winter sports lovers have staged several protest rallies in Sofia to voice outrage about new legal amendments that would alleviate construction in the nearby Vitosha Mountain. Photo by BGNE

Bulgarian environmentalist are staging once again Tuesday a protest rally against looming amendments to the Forestry Act.

It is organized by the coalition of NGOs, known as "For Keeping Nature in Bulgaria" with the support of other civic organizations.

The demonstrators will be holding 240 axes, one for each Member of the Parliament, in sign of protest. They will place them in front of the General Assembly building. Earlier in the day, the environmentalists will also bring an axe to Prime Minister, Boyko Borisov, with the request to bring an end to corruption scams for the destruction of Bulgarian forests.

At the march, the eco-activists will reiterate demands to the MPs to not pass at second reading the amendments, which give big investors rights to build in Bulgarian mountains. They insist if passed they will doom Bulgaria to cheap felling of State and private woods to build ski lifts and tracks, to landslides and floods.

According to them, the forests in protected areas of Bulgaria, which occupy only 5% of the country, will be the most vulnerable. The new Act will be further proof that the State does not serve public interest, but private economic interests of one businessman, banker Tseko Minev. Minev, through his offshore companies - ski operators Yulen and Vitosha Ski, now controls 3 of the 4 major ski areas in Bulgaria - Bansko, Borovets and Vitosha.

The Coalition further points out that the government plans to "cut" 12% from the territory of the National Park "Pirin," which is one the UNESCO world natural heritage list, with the sole goal to allow the expansion of the Bansko ski area.

Nevertheless, "Vitosha Ski" did not turn on the lifts, withdrew their ski instructors, and demanded amendments in the Forestry Act, interpreted by many as an attempt to blackmail the State by opposing winter sports lovers and the institutions. The move deprived Sofia residents and visitors from enjoying skiing near the capital for the entire winter season.