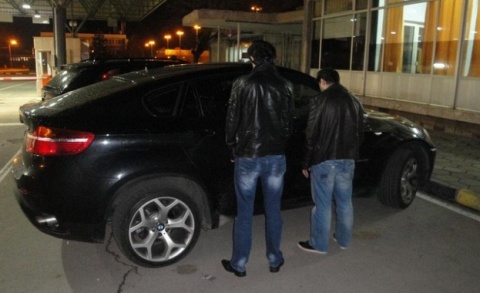 Two late-model stolen BMW SUVs were stopped by police at the Bulgarian-Turkish border in an operation codenamed Poseidon. Photo by Cross Agency

Bulgarian border police have arrested overnight Saturday into Sunday a group of foreign nationals attempting to drive stolen vehicles out of the country.

The operation, codenamed "Poseidon," had been carried out the Capitan Andreevo cross border checkpoint between Bulgaria and Turkey.

Two late-model SUVs – a BMW X5 and BMW X6, were stopped on their way to Turkey. The probe, which had been joined by a German expert, established that the VIN numbers of both vehicles have been tempered with.

A computer check revealed that the SUVs have been stolen – one in the Netherlands and the other in Italy. They had German license plates and were driven by a 24-year-old Dutch citizen, who traveled in the company of a 28-year-old female German woman, and by a 27-year-old Brit.

All three have been arrested and pre-legal trial proceedings have been launched. The authorities are currently in the process of establishing if the detainees have criminal records.