French Interior Warn of New 'Serial Killer' ahead of Elections 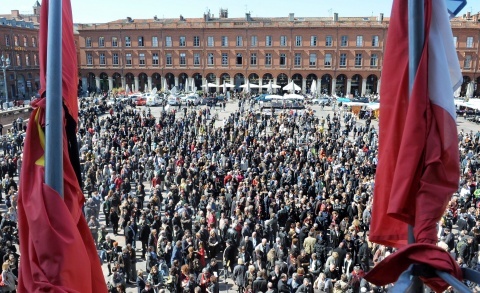 Hundreds of people participate in a minute of silence to pay tribute to the victims of the Toulouse school and three French soldiers, at the Capitol square in Toulouse, France, 23 March 2012. EPA/BGNES

Security levels have been raised in a number of areas in French capital Paris, after police announced what they called suspicions of a new serial killer.

Friday an Algerian immigrant woman was shot in a hit and run attack by a scooter rider in a Paris suburb.

This has been the fourth of a string of murders since November 2012 that the police say were carried out by one and the same weapon.

The possibility that France faces a new serial killer must not be dismissed, stated French Minister of Interior Claude Gueant Saturday.

March France was shaken by the tragic events in Toulouse, where a Algerian immigrant Mohammed Merah, 23, killed three French soldiers, as well as three pupils and a rabbi at a local Jewish school.

The killer, said to be motivated by exasperation at lack of opportunities in French society, and a radicalized version of Islam, was later eliminated by special units.

Soon after the events, opinion polls revealed that French President Nicolas Sarkozy, who hopes to be re-elected for another term on presidential elections April 22 / May 6, has caught up with his main opponent, Socialist candidate Francois Hollande.

After the Toulouse killings, the French government also announced it is going to impose tougher laws censuring hate speech in the country.

Saturday French Minister of Interior Claude Gueant also warned that there are Islamist groups functioning in France that are willing to avenge the death of Mohammed Merah.