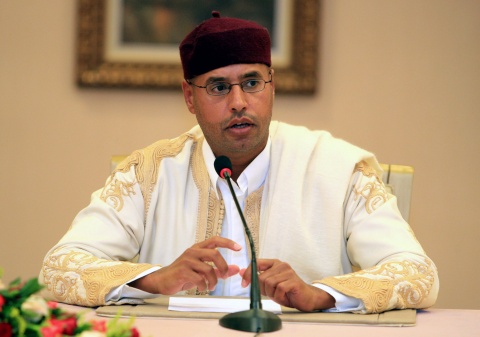 Saif al-Islam Gaddafi, the son of Libya's former dictator, has only been charged with trivial matters such as failure to licence his camels, human rights campaigners have claimed.

International Criminal Court officials warned that Gaddafi was in a legal black hole having been held by Libyan militias in informal detention facilities for 139 days, The Daily Telegraph reported.

The ICC has issued an arrest warrant for alleged crimes against humanity and a United Nations Security Council resolution requires that he is delivered to The Hague to face trial.

The stand-off caused an angry intervention by Kenneth Roth, the head of the campaign group, Human Rights Watch.

"Saif Gaddafi lawyers say Libya's initial charges were for 'the absence of a licence for camels, and irregularities concerning fish farms," he said on Twitter.

After stalling on bringing more serious charges such as murder, the Libyans were said to be pursuing evidence for capital crimes, but are refusing to contemplate sending him overseas.

The captured former London School of Economics graduate, who has lost two fingers and a thumb tip in a revenge attack by his captors, should be handed over to The Hague. "The Libyan authorities have a clear obligation under UN Security Council resolution 1970 to surrender Saif," he said. "Trial at the ICC is a last resort, but the ability of the Libyans to be able to do complex criminal trials of this sort is not present in the chaotic current circumstances.

"The charges being pursued against Saif are relatively minor but need to be the most serious under international law otherwise they will squander this important opportunity to bring him to justice."

Lawyers appointed to handle Mr Gaddafi's defence demanded that Tripoli abandon its plans to try him.

"At no point have the Libyan authorities been legally justified in their failure to surrender him to the ICC," said lawyers Xavier-Jean Keita and Melinda Taylor. "The brutal death of Muammar Gaddafi deprived the Libyan people of their right to justice, and their right to the truth. It would be a travesty for the prospects of a free and fair Libyan state if the same were to occur to his son."

Amnesty International added its voice to the chorus of criticism of the failure to hand over Gaddafi. "This clear ruling by the ICC judges should effectively bring an end to the long-running saga over the fate of Saif al-Islam," said Marek Marczyski, its head of justice. "Libya must act on the ICC's decision and surrender Saif al-Islam without further delay."

The Hague-based court ordered Tripoli to comply with its obligations to enforce the warrant of arrest.

In a written ruling judges at the court rejected a request by Libya to postpone handing over Gaddafi and urged the country's rulers to "proceed immediately with the surrender."

But the issue is further complicated by the refusal of militias in Zintan, a mountain region where he has been held since his capture last year, to hand over Gaddafi to the government in Tripoli.

The government has set aside a prison to hold Gaddafi in solitary confinement until a verdict is reached.