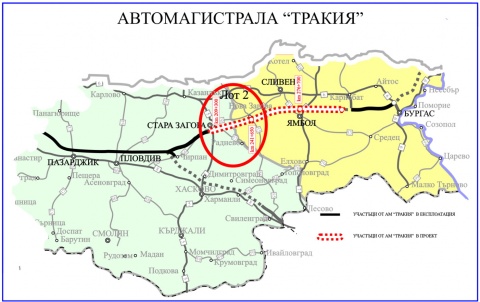 About 1/3 of the Trakiya Highway from Sofia to Burgas is still uncompleted. Map from chambersz.com

In her words, the builders of the 360-km highway has committed to completing it ahead of schedule with July 1 being the most optimistic deadline for the still uncompleted Lots 2 and 3.

At the same time, the accelerated completion of the Trakiya Highway is not supposed to affect its quality because the government will be "following the builders' work very strictly", Pavlova said on TV7 Friday.

About two-thirds of the Trakiya Highway have already been completed, with the full completion being projected for the late summer/fall of 2012. When completed, it will be the first major highway in Bulgaria, not counting the 19-km Lyulin Highway completed last year.

Another important road project for which the government is starting tenders is the four-lane road between Burgas and the largest Bulgarian Black Sea resort Sunny Beach.

She added that the authorities will not be cutting just ribbons "but cables as well" because of the new government regulations prohibiting the use of wiring on street poles in towns with population over 10 000.

The minister also spoke about the need to rehabilitation of the communist-era panel-construction residential buildings that are used by the majority of the Bulgarian population.

The Bulgarian government is launching a communist-era construction rehabilitation campaign as of July 1, 2012, she said, providing grants of BGN 5000 per apartment, plus low-interest credits from private banks.

Entire buildings in a total of 36 cities and towns can apply to join the program, the only condition being that the buildings must have been constructed before April 1999.