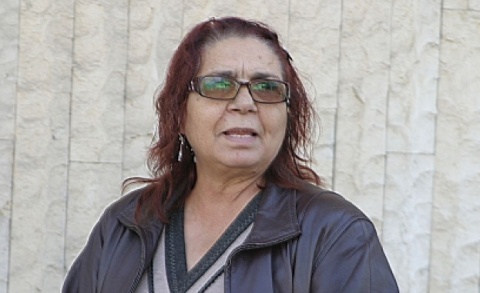 The family of Bulgaria's notorious Roma boss Kiril Rashkov AKA Tsar Kiro has been moving in the last several days to a 6-story hotel building in downtown Plovdiv.

The building in Bulgaria's second largest city belongs to them. It has been constructed in 1994-1995, and has been unoccupied ever since.

According to a report of Bulgarian 24 Chassa (24 Hours) daily, Tsar Kiro's wife Kostadinka AKA Queen Kostadinka, her daughter Sabka, her son Angel, and their families, as well as the family of her late son Ivan will live on three floors while the rest will be rented.

Angel Rashkov is quoted saying that the clan had already found tenants wanting to open lawyer's and doctor's offices.

The newspaper further writes that trucks and movers have been spotted busying near the building for several days now, bringing furniture inside, including Tsar Kiro's infamous gold-plated throne.

Angel says that the hotel will be equipped with security cameras because the family fears new attacks and arson, adding they will return to the village of Katunitsa after tensions subside because 3-4 of their houses there are legal.

At the end of March, the family began moving out of Katunitsa.

In October 2011, the Regional Construction Control Directorate in the nearby city of Plovdiv ordered the demolishing of the clan's illegally erected buildings.

Different members of the family contested the order before the Administrative Court, but it is final for four of the so-called castles. Local utilities then cut water and electric power supply for all of Rashkov's estates.

In order to avoid setting foot in the village, the family hired movers and informed the police in advance.

Rashkov was found guilty by the court in the southern Bulgarian town of Asenovgrad of threatening to kill Veselin Hristov and Ivanka Petrova.

The court verdict was based on the testimonies of 12 witnesses, and CCTV footage which has no sound but shows a man in a black jeep parked in front of the home of Hristova and Petrov gesturing angrily.

Rashkov, a notorious Roma barron, has been detained at the end of September 2011 when his associates ran over and killed a local ethnic Bulgarian boy in Katunitsa. 19-year-old Angel Petrov is believed to have been killed because of a conflict with Rashkov's Roma clan.

Locals from the Katunitsa village waiting to hear Rashkov's sentence in Asenovgrad commented that they are satisfied with the verdict but that it will not compensate for the fear and pain they have suffered, claiming that Rashkov and especially his grandsons have been terrorizing and intimidating the entire village.