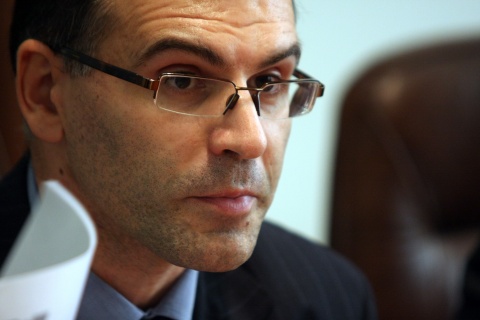 Bulgarian Finance Minister, Simeon Djankov, is meeting with protesting lead workers in an attempt to resolve the issue with their long-overdue wages. Photo by BNGES

Bulgaria's Deputy Prime Minister and Finance Minister, Simeon Djankov, is on a visit to the southern city of Kardzhali Friday in an attempt to deal with escalating protest rallies.

Workers of the Lead and Zinc Complex in Kardzhali, the leading Bulgarian non-ferrous metals producer, have been rallying since March 1 with demands to receive their long-delayed salaries. A representative group will meet with Djankov with hopes to hear good news about their money.

On Thursday, the metallurgists blocked the main local road, connecting the cities of Kardzhali and Haskovo. In the afternoon, they organized a protest rally and a march, which was attended and supported by other residents of the city.

Representatives of the Confederation of Independent Syndicates in Bulgaria, KNSB, at the plant are adamant they will protest until the money gets to the workers' bank accounts. They say that if the salaries are not paid by Friday, April 6, the rally and blockades will be moved to the capital Sofia on April 11, and to the nearest cross border checkpoint.

It was also reported that the Central Bank, BNB, and First Investment Bank, FIB, have provided funding for security at the plant since its own security guards are also on strike and cases of theft there are on the rise.

On March 31, Prime Minister, Boyko Borisov, personally visited Kardzhali and promised the outraged workers they would be receiving their money within a week.

Zahariev announced one week ago that he had been able to secure a loan in the amount of BGN 1.5 M to pay the salaries, but failed to set an exact deadline on grounds he was still seeking collaterals for loan.

KNSB inform that the deal for the concession of the Gorubso Madan metal mines has not yet been finalized, which was the condition to find some funds for salaries and benefits for the Kardzhali workers. The trade unions accuse Zahariev of racketeering the new owners.

It was reported two weeks ago that businessman Nikolay Valkanov will be taking over the concession of the Gorubso Madan metal mines from Valentin Zahariev. Valkanov is a former VP of Multigroup, and currently owns "Minstroy" and Gorubso Zlatograd and has a concession of the "Varba" mine.

The Minister says that as it was in Madan, poor management is to be blamed for the overdue wages of the workers at the Kardzhali plant.