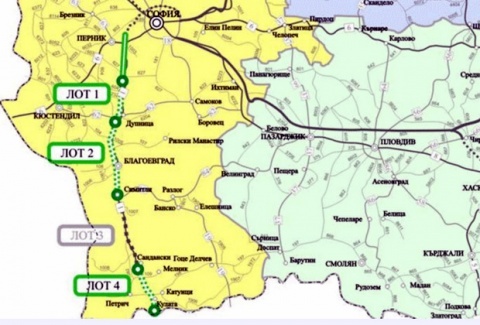 The construction of Lot 4 (the southernmost section) of the Struma HIghway starts on Thursday, April 5, 2012. File ma

Bulgaria is holding Thursday, April 5, the groundbreaking ceremony of the 15-km Lot 4 of the Struma Highway.

On March 19, the Greek company Aktor and the Bulgarian Road Infrastructure Agency signed the contract for the construction of Lot 4 of the Struma Highway leading from Sofia to the Bulgaria-Greece border.

The construction of the road section will cost BGN 59 M, and is supposed to be completed in 23 months.

Its launch was delayed by seven months because another bidder in the public procurement tender, "Trace Group Hold," appealed the selection of Aktor.

The construction works will require moving the tracks of the Sofia-Kulata railway line as well as building special facilities to protect a number of endangered animal species, including tortoises. The highway will have 5 overpasses, three underpasses, 2 railroad underpasses, and 7 bridges.