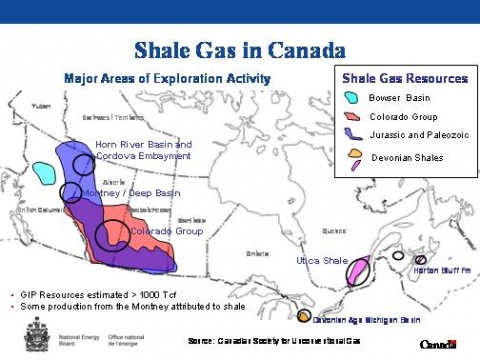 Map from Canada's National Energy Board

The Canadian province of Quebec has moved from a de facto ban on shale gas development to a complete and total moratorium after a report issued by a special body.

A committee named by Quebec Environment Minister Pierre Arcand to determine whether shale gas can be extracted while respecting the environment released plans Tuesday for further study and recommended the minister not authorize hydraulic fracturing, or fracking, even for research purposes during an ongoing halt in development, The Calgary Herald reported.

Arcand, in announcing the strategic environmental assessment last May, had said fracking would be allowed for research purposes.

Committee chair Robert Joly said in his report that Quebec could rely on laboratory experiments on fracking.

The paper cites Calgary oilpatch executive Michael Binnion as lamenting the report of the committee, following news that a review on hydraulic fracturing will not include any demonstrations in the province.

While the industry does not need to see fracking in action, the agency overseeing the study - the Bureau d'audiences publiques Sur l'environment (BAPE) - had a mandate to examine the social acceptability of the process in Quebec, including demonstrations, argued Binnion, the chief executive of junior producer Questerre Energy Corp.

"I'm disappointed that they have, on their own, rejected that mandate," Binnion said. "The benefit to our industry is social acceptability and being able to show Quebecers with their own eyes that it works safely, in a French-language context."

The paper points out that Questerre has land prospective for shale gas in Quebec, including about 324,000 hectares where Talisman Energy Inc. has the majority interest and another 81,000 hectares with other partners.

The Calgary Herald also reminds that Quebec issued a temporary ban on hydraulic fracturing pending further study last March, putting a halt to exploration in the province, though companies had expected limited drilling for research purposes. Environmental groups, farmers and others in Quebec had spoken out against shale gas development in the province.

The committee will order several more studies with a deadline of next spring, Joly said Tuesday, with the final report targeted for completion some time in 2013.

He reported that the committee learned a lot from public hearings held from November 2011 to January 2012 and said there would be further hearings, geared toward specific sectors.

Committee members plan to also travel to Alberta and British Columbia, and to Ohio, Pennsylvania and New York, where there are also shale-gas deposits.

The news about the negative shale gas report in Quebec comes just as the Bulgarian Parliament formed a special committee on mineral and energy resources, which environmentalists and opposition parties fear may seek to reverse the moratorium on shale gas exploration and extraction imposed in early 2012 after public protests over an earlier shale gas exploration permit granted to Chevron.