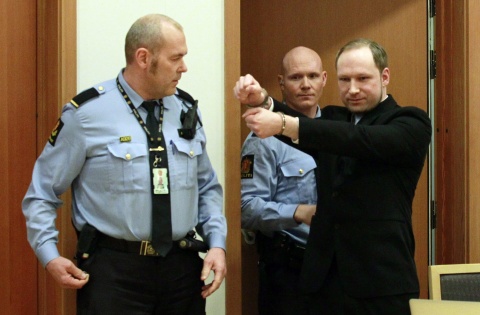 Anders Behring Breivik (R) arrives at the court for his hearing in Oslo, Norway, 06 February 2012. EPA/BGNES

Norwegian mass murderer Anders Behring Breivik has described the psychiatric report that concluded he suffers from paranoid schizophrenia is wrong.

"I received access to the full report around December 12 and I immediately started reading the 243-page document. I was terrified, to say the least, over what was represented as my own explanation, namely what was presented as the content of the thirteen conversations with the psychiatrists," Breivik has written in a 38-page letter he sent to Norwegian tabloid Verdens Gang.

In his letter, Breivik has described himself as a "political activist."

"To send a political activist to an asylum is more sadistic and more evil than killing him!" he wrote.

Breivik's trial is expected to start on 16 April and his lawyers say he wants to be tried as sane, BBC reminds. He is charged with committing acts of terrorism.

The 33-year-old right-wing extremist has been in custody since the 22 July attacks in Oslo and at a youth camp on the island of Utoeya, in which he shocked the world by killing 77 people, mostly teenagers.