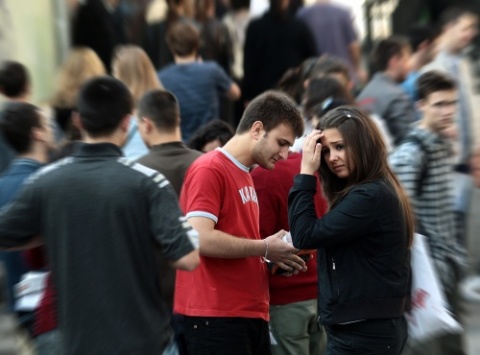 Bulgarians are among the unhappiest people in the world, according to the study. File photo by EPA/BGNES

Bulgaria is among the ten unhappiest countries in the whole world, according to UN's first World Happiness Report.

According to the report, only Togo (ranked last), Benin, the Central African Republic, Sierra Leone, Burundi, Comoros, Haiti, Tanzania and Congo are unhappier than the Balkan nation.

Bulgaria, a EU member state, is the only country in the unfortunate list that is located outside Africa - besides Haiti, which suffered a disastrous earthquake in 2010.

According to polls taken from 2005 to 2011, Denmark is the happiest country in the world, followed by Finland, Norway, the Netherlands, Canada, Switzerland, Sweden, New Zealand, Australia and Ireland.

The four happiest countries have incomes that are 40 times higher than the four unhappiest countries, the report said, as cited by Los Angeles Times. People can also expect to live 28 years longer in the happiest nations.

According to the International Monetary Fund, Bulgaria's GDP per capita in 2011 was 13,562 international dollars, which makes it the 67th wealthiest country in the world.

The full report can be read HERE.