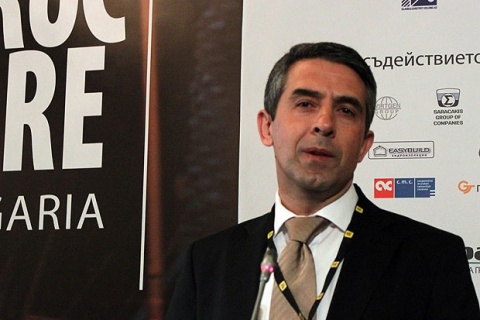 President Rosen Plevneliev has expounded the benefits of the idea of countries pooling resources to buy defense equipment. Photo by Sofia Photo Agency

President Rosen Plevneliev has spoken in favor of the creation of a NATO cyber defense backup center in Bulgaria.

In Plevneliev's words, the move would position Bulgaria among the elite of hi-tech countries.

In a Monday statement at the opening of an international conference on smart defense, he explained that the idea had already been presented to the NATO Secretary General.

Plevneliev stressed that there were "plenty of hackers and intelligent young people" in Bulgaria that could be reoriented to work for cyber security and 21st century communications.

"Otherwise talking about Spartans and Cougars makes no sense", he remarked, adding that Bulgaria was willing to generate projects and to be a regional leader in the sphere.

Commenting on the concept of smart defense and Bulgaria's capabilities, the head of state pointed out that it was much better for a few states to pool financial resources to buy frigates, aircraft and light weapons and to set up plants for the maintenance of the equipment.

"We extended an invitation to the leaders in the region and we are already cooperating on an expert level to negotiate the joint purchasing of defense equipment and how Bulgaria and the region should once and for all forget the past of the Balkans and that we should seek new dimensions of regional cooperation," Plevneliev declared.

"Bulgaria is the first country in the region to bring up the issue of the lack of cooperation and the opportunities for joint purchases of defense equipment," the Bulgarian President emphasized.

He said that the move would result in lower prices of the equipment and would also necessitate the establishment of local repair and maintenance spots.

Plevneliev expressed his satisfaction over the newly voiced proposal for setting up a center specialized in smart defense at the University of National and World Economy (UNWE).

He argued that Bulgaria could become a regional leader in the sphere of smart defense and specified that Austria, Macedonia and Serbia had already expressed interest in participating in such a center.

Asked to comment on a set of proposed amendments to the legal regime of Bulgaria's special services, he said that some units had overlapping functions which had to be remedied through clear-cut provisions setting out the responsibilities of each body and the control mechanisms.

Plevneliev refused to state his opinion on the idea of nominating a Deputy Prime Minister in charge of Defense, adding that he would present his stance at the forthcoming discussion at the Consultative National Security Council.

Bulgaria's President vowed that a final decision would be taken by April 20.