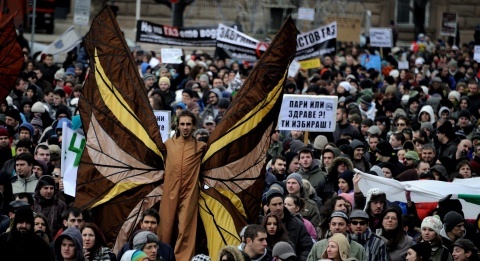 People shout slogans as they hold a posters during a rally against the production of shale gas in Sofia, Bulgaria 14 January 2012. EPA/BGNES

US energy giant Chevron has reportedly announced the temporary cassation of its shale gas exploration activities in Romania this year.

The report says that Chevron has no claims regarding the concession contract signed with the Romanian government.

Romanian authorities are yet to reveal the contract.

At the end of March, Romania granted  Chevron permission to to explore and exploit shale gas in three coastal perimeters - Vama Veche, Adamclisi and Costinesti.

Around 5,000 people recently protested in Barlad against the shale gas exploitation, saying the extraction method is 'dangerous'. In response, Chevron representatives claimed in a statement that natural gas from shale gas reserves represents a clean source of energy, and that Romanians have no reason to worry.

Meanwhile, on Monday, Bulgaria's Economy and Energy Minister Delyan Dobrev revealed that a parliamentary committee would be set up this week to review the country's hydraulic fracturing moratorium.

The moratorium on the method was imposed on January 18.

On January 17, the Bulgarian government revoked a shale gas exploration permit granted to  Chevron for deposits in Northeastern Bulgaria, citing the insufficient proof of the environmental safety of hydraulic fracturing.