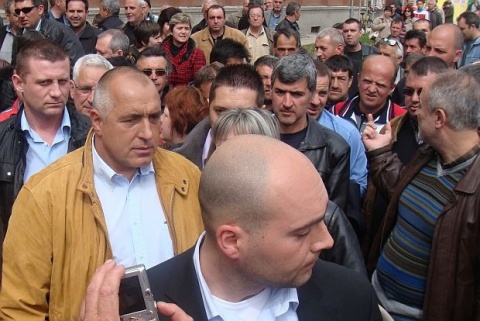 The workers from the highly troubled Lead and Zinc Complex (LZC; OTZK) in Bulgaria's southern city of Kardzhali have received meager one-time cash payments from the government but remain ready to strike.

A total of 519 employees of the Lead and Zinc Complex in Kardzhali, the leading Bulgarian non-ferrous metals producer, who have not received salaries for half year, got BGN 325 each, secured by the Social Assistance Agency.

"We are assisting the completion of the talks between the banking creditors and the owners of the plant so that a new manager can come and manage the plant in order to make it profitable," Bulgarian PM Borisov stated in Kardzhali Saturday, as cited by Focus.

"I hope that at the end of next week I will come once again here with a solution for the payment of the salaries," he added, leading the metallurgical workers to send him off with applause.

At the same time, the LZC workers have still made it clear that they are ready to stage mass rallies and strikes until they get their due payments.

On Friday, the workers filed personal claims in Court against the owner of the plant, Bulgarian oligarch Valentin Zahariev, who is also know for mismanagement of what used to be the largest steel-maker in Bulgaria, the now bankrupt Kremikovtzi plant near Sofia. They demand the replacement of the entire management, starting with him.

The Lead and Zinc Complex is owned by Zahariev, now-former owner of the Gorubso Madan metal mines. Gorubso Madan miners finally received their overdue wages on Saturday after they had been staging protests for two weeks.

Zahariev announced Thursday that he had been able to secure a loan in the amount of BGN 1.5 M to pay the salaries, but failed to set an exact deadline on grounds he was still seeking collaterals for loan.

Representatives of the Confederation of Independent Syndicates in Bulgaria, KNSB, at the plant are adamant they will protest until the money gets to the workers' bank accounts.

They even threaten to move the blockades to the capital Sofia and say they do not believe one single word that comes from Zahariev.

It was announced a week ago that businessman Nikolay Valkanov will be taking over the concession of the Gorubso Madan metal mines from Valentin Zahariev. Valkanov is a former VP of Multigroup, and currently owns "Minstroy" and Gorubso Zlatograd and has a concession of the "Varba" mine.

The Minister promised to talk with Zhariev's creditors to find out their intentions. He says that as it was in Madan, poor management is to be blamed for the overdue wages of the workers at the Kardzhali plant.

Meanwhile, it emerged Thursday that the deal with Gorubso Madan is near conclusion and there is a need of just one signature to make it a fact.