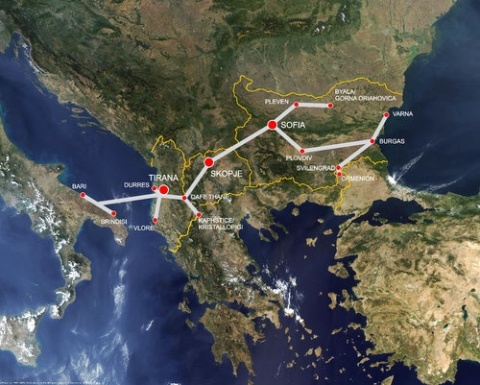 Bulgaria and Italy will work in order to make the still largely imaginary Pan-European Transport Corridor No. 8 a EU priority under a new funding instrument, Bulgarian President Rosen Plevneliev announced.

Plevneliev spoke to the Bulgarian National Radio on Saturday, after returning from an official state in Italy, where he "resurrected", at least verbally, the project for Transport Corridor No. 8, which is supposed to link Central Asia and Western Europe via the Black Sea, the Balkans, and the Adriatic.

"Bulgaria and Italy... support joint projects such as Corridor 8, a trans-European corridor that ends at Bulgaria's Port Burgas," the Bulgarian President said.

"We got a lot of praise from Italian President Napolitano, and from the Italian government because Bulgaria at present is probably the only country doing construction and working hard along the route of Corridor 8, and especially as we are building the highway from Sofia to Burgas," he added.

"We agreed to exert our joint efforts so that Corridor 8 can become a priority under the so called Connecting Europe Facility, which is a new instrument of the European Commission for the funding of trans-European infrastructure projects," Plevneliev explained.

Pan-European Corridor No. 8 – a parallel linking the Bulgarian Black Sea ports to the Albanian Adriatic ports via Macedonia along and its extension to Italy, a supposedly vital chain in the proposed shortest route between East and Central Asia and Western Europe – has been talked about for years with grand expectations for boosting trade and development in the Balkans – but has seen little realization.

The Balkan route of Corridor No. is about 1 350 km long, and includes, roads, railways, airports, and sea ports.

To date, Transport Corridor 8 has remained largely imaginary, and has solely boiled down to political declarations.

Probably the most important obstacle for the project is the lack of a railway connection between Bulgaria and Macedonia, with the Macedonian state balking at the construction of several dozen kilometers of line on its territory.