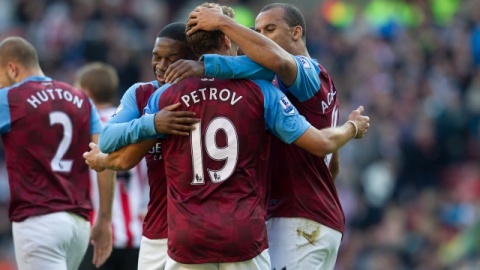 Fans have demonstrated overwhelming support for Petrov. Photo from avfc.com

The English Premiership club of Aston Villa has thanked its fans for the overwhelming show of support for captain Stiliyan Petrov, the Bulgarian midfielder, who has been diagnosed with Acute Leukaemia.

The claret and blue family - and supporters of football clubs from all over Europe - were quick to rally around the popular Villa skipper, the club website said, adding that there have been floods of goodwill messages on forums and social networking websites.

The fans planned various signs of support for Stiliyan Petrov during Villa's Saturday game against Chelsea.

A campaign has been started on Twitter encouraging those in attendance at Villa Park to stand and applaud during the 19th minute of the match, in recognition of Petrov and his shirt number 19.

A "Scarves for Stan" campaign also began on Twitter and Facebook, while many more supporters have pledged to hold aloft banners and shirts saluting the 32-year-old midfielder.

Meanwhile, a series of Twitter hashtags - such as #getwellsoonstan, #supportstan, #getwellstan and #prayforpetrov - have been in circulation as players, supporters and clubs from across the football community wished Petrov well.

The Aston Villa website has also collected and published a number of headlines from major British newspapers about Stiliyan Petrov's condition.

Birmingham Mail: Stiliyan Petrov has vowed to beat acute leukaemia after the Aston Villa captain was diagnosed with the potentially life-threatening illness.

Birmingham Mail: Alex McLeish has urged Aston Villa to rally round and 'Win it for Stan' by using their shock and concern as a positive force against Chelsea today.

Birmingham Mail: Alex McLeish has laid bare the sequence of events which culminated in the shock and despair of popular captain Stiliyan Petrov being diagnosed with Leukaemia.

Birmingham Mail: Stiliyan Petrov has pledged to beat acute leukaemia - with Aston Villa and the football world coming together to pray for the club captain.

Birmingham Mail: Aston Villa's claret and blue family pulled together to offer their support to Stiliyan Petrov and his family.

The Sun: Aston Villa boss Alex McLeish last night urged his players to 'do it for Stan' when they face Chelsea today.

Mirror: Stiliyan Petrov was told 'you can get through this' by top ref Mark Halsey, who beat cancer and got back to the Premier League.

Daily Express: Aston Villa manager Alex McLeish says Stiliyan Petrov is "fighting like a captain" after the shock news he has leukaemia.

Guardian: An early diagnosis could be "crucial" for the recovery of the footballer Stilian Petrov as he undergoes treatment for acute leukaemia, an expert has said.

Guardian: Geoff Thomas believes Stilian Petrov will receive excellent care after the shock news that the Aston Villa captain has been diagnosed with acute leukaemia.

Independent: Barely an hour after the football world was delighted to see a photograph, tweeted on his behalf, of Fabrice Muamba sitting up in his hospital bed smiling, it was stunned anew by the news that Stiliyan Petrov has cancer.