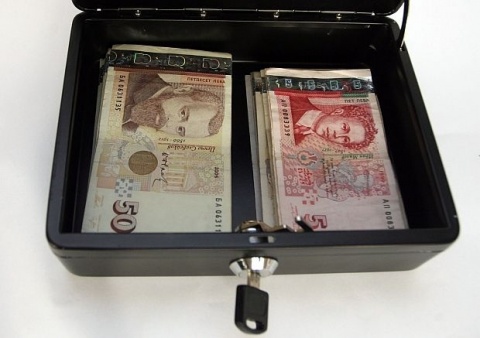 Bulgaria has completed the first two months of 2012 with a budget deficit of BGN 565 M on cash base, the Finance Ministry announced Saturday providing data for the so called "Consolidated Fiscal Program", including the state budget and EU transactions.

Thus, in January-February 2012, Bulgaria's state budget registered a deficit of BGN 327.6 M, while Bulgaria's EU payment balance (i.e. the EU funds received minus the country's contribution to the EU budget) is a negative BGN 237.4 M.

The Finance Ministry points out the slight improvement year-on-year, by BGN 185.5 M, as in Jan-Feb 2011 the Bulgarian budget deficit was BGN 750.5 M.

As of February 29, 2012, the government's income from health insurance and social security payments amounted to BGN 843.7 M, or 15.2% of the projection.

Bulgaria's total spending in the first two months of the year, including its contribution to the common EU budget, amounted to BGN 4.246 B, or 14.2% of the projection for 2012.

The Bulgarian budget has seen growing spending on subsidies and capital spending, which stems from "the efforts for accelerated absorption of EU funds", according to the Finance Ministry. The earlier payment of agricultural subsidies to farmers has also added to the spending increase, it said.

Bulgaria's contribution to the common EU budget paid before February 29, 2012, amounted to BGN 241.6 M in accordance with regulation 1150/2000 of the Council of the European Union.

As of the end of February, Bulgaria's fiscal reserve amounted to BGN 3.8 B.

The Finance Ministry explained Saturday that as of early March 2012 the European Commission has refunded to Bulgaria subsidies paid out in December and January, worth BGN 683.9 M, thus "compensating the temporary decline in the resource of the fiscal reserve since the beginning of the year."