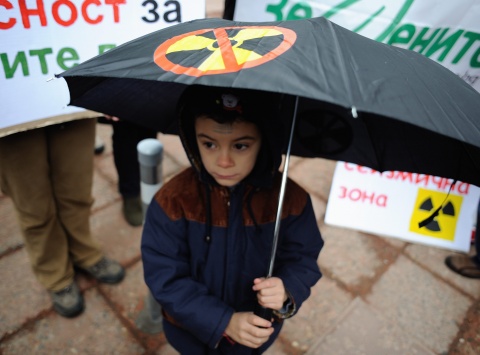 A child holds an umbrella that carries nuclear symbol during a demonstration in Sofia, Bulgaria 19 March 2011. Members of several environmental organizations protested against the government`s plans to build second nuclear plant near town of Belene. EPA/B

Bulgaria has sent a note to Russia asking it to launch negotiations on the cancellation of the two countries' Belene nuclear power plant project that was to be built in Bulgaria, according to a report.

On Thursday, Russian Deputy PM Igor Sechin is expected to meet with representatives of the Russian Energy Ministry and state-owned company Rosatom in order to form Russia's official stance on the issue, the BGNES news agency has informed.

Bulgaria faces penalties amounting to way over USD 58 M over the cancellation of the Belene NPP project, Russian media warned on Thursday.

Bulgaria's Parliament has already adopted a decision to terminate the construction of the 2000 MW nuclear power plant, a project conceived back in the 1980s.

The construction of the 2000 MW plant by Rosatom subsidiary Atomexportstroy had been delayed with annexes 15 times.

Rosatom had made it clear it is ready to agree on yet another extension of the contract with the Bulgarian government for the construction of the Belene nuclear power plant.

The currently active extension of the 2006 deal between Bulgaria's National Electric Company NEK and Atomstroyexport was set to expire at the end of March 2012.

After selecting Atomstroyexport to build a two 1000-MW reactors at Belene and signing a deal for the construction, allegedly for the price of EUR 3.997 B, with the Russians during Putin's visit to Sofia in January 2008, in September 2008, former Prime Minister Sergey Stanishev gave a formal restart of the building of Belene. At the end of 2008, German energy giant RWE was selected as a strategic foreign investor for the plant.