Clan of Notorious Roma Boss Moves out of Bulgarian Village 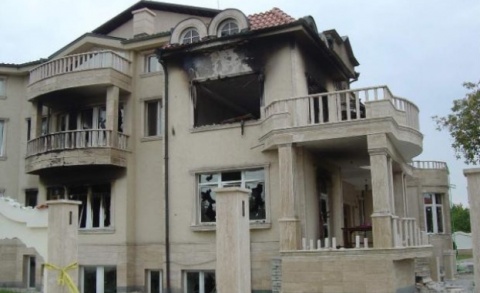 One of the several "castles" of Kiril Rashkov in Katunitsa, which was set on fire during the residents' unrest. Photo by BGNES

The family of Bulgaria's notorious Roma boss Kiril Rashkov AKA Tsar Kiro is moving out of the village of Katunitsa, according to local people.

In October 2011, the Regional Construction Control Directorate in the nearby city of Plovdiv ordered the demolishing of the clan's illegally erected buildings.

Different members of the family contested the order before the Administrative Court, but the order is final for four of the so-called castles.

The Bulgarian Monitor daily writes that 10 days ago local utilities have cut water and electric power supply for all of Rashkov's estates. The family is now emptying all premises, which had been confirmed by the Police Chief in the town of Asenovgrad.

In order to avoid setting foot in the village, the family has hired movers and informed the police in advance.

Monitor further reports that the clan is currently occupying a large, luxury building in Plovdiv.

Rashkov was found guilty by the court in the southern Bulgarian town of Asenovgrad of threatening to kill Veselin Hristov and Ivanka Petrova.

The court verdict was based on the testimonies of 12 witnesses, and CCTV footage which has no sound but shows a man in a black jeep parked in front of the home of Hristova and Petrov gesturing angrily.

Rashkov, a notorious Roma barron, has been detained at the end of September 2011 when his associates ran over and killed a local ethnic Bulgarian boy in Katunitsa. 19-year-old Angel Petrov is believed to have been killed because of a conflict with Rashkov's Roma clan.

Locals from the Katunitsa village waiting to hear Rashkov's sentence in Asenovgrad commented that they are satisfied with the verdict but that it will not compensate for the fear and pain they have suffered, claiming that Rashkov and especially his grandsons have been terrorizing and intimidating the entire village.