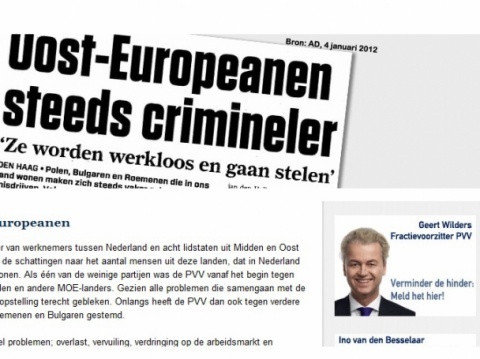 A close up view of a page of a website set up by the right-wing Dutch Freedom Party (PVV). File photo

Dutch Members of the Parliament have condemned the the notorious anti-immigration website created by the far-right PVV party of Geert Wilders.

The declaration, submitted by the opposition centrist party D66, had been approved by 94 votes for in the 150-seat local Parliament. It states that the site is prompting unnecessary discrimination of a group of the country's population, the Bulgarian National Radio, BNR, reports Wednesday.

On March 13, 2011, following in the footsteps of the Council of Europe, the European Parliament demanded that the Dutch government distance itself from the anti-immigration website, but Prime Minister, Mark Rutte, said then that he would refrain from comments because it belonged to a party, not to the cabinet.