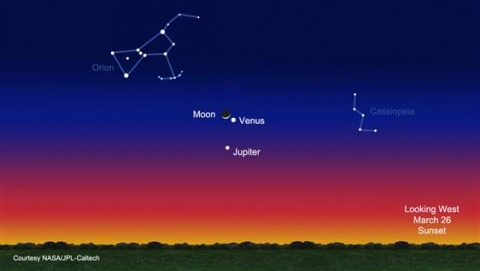 This NASA sky map shows the positions of Venus, Jupiter and the moon on March 26, during a potentially spectacular conjunction of the three objects.

Skygazers from around the world, including Bulgaria, were treated Monday night to the rare opportunity of feasting their eyes on Jupiter, Venus and Moon arranged in a captivating triangular formation.

On Monday night the waxing Moon (wider compared to last night) aligned with Venus, while Jupiter will sit beneath the Moon-Venus pairing.

"This is not an extremely rare phenomenon, but it happens once every five or six years," Nikola Petrov, head of Bulgaria's National Astronomical Observatory "Rozhen" commented.

Many Bulgarians have voiced strong desire to visit the observatory during the special night, but the road up to it is tough and besides the great spectacle can be seen  with your unaided eye.

The best time to view this arrangement began about 45 minutes after sundown through about 10 p.m.