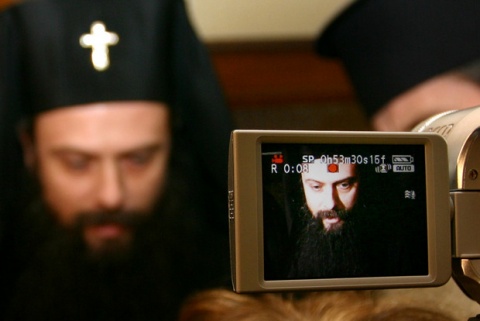 Plovdiv Metropolitan Nikolay is one of the few in the Holy Synod, who have not worked for the former State Security, but he is also much younger than most of them. Photo by Sofia Photo Agency

Bulgarian bishops, who have been exposed as agents or collaborators of the former Communist State Security must choose between repentance and resignation.

The statement was made by Plovdiv Metropolitan Nikolay, speaking in an interview for TV7. Nikolay is one of the few in the Holy Synod, who have not worked for the former State Security.

"The topic of files yet to be decided, we will not get quickly to the end of this painful situation. The decision on the issue with these records depends on each one of us and on the individual conscience of bishops," the Metropolitan told the host.

He stressed that bishops can to respond to the scandalous files in their own way, but the response should be either resignation or public repenting.

Nikolay explained that it does not make sense for the Holy Synod to issue a joint decision on the matter.

"Anyone can come out and resign, repent before his congregation, or accept the advice of the other members of the Synod. This is a difficult subject, very, very difficult," concluded the Bishop.

After the revelations, Bulgaria's Holy Synod demonstrated significant irritation on the subject of their Communist era files.

In mid-March, reporters approached the bishops as they gathered for a meeting of the Synod with questions on how they will react to recent revelations that the majority of them have been agents and collaborators of DS.

To a question of a reporter from the State TV BNT on his reaction about the files, the Vratsa Metropolitan, Kalinik, slapped her on the face with a newspaper.

When she asked him why he had hit her, the Bishop replied: "I am not hitting you, just trying to close your mouth."