One Shot in Bulgaria Gangland War 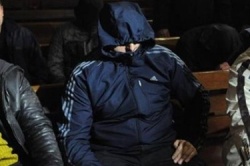 Kiril Kirilov, aka Shkafa, in the courtroom. Photo by BGNES

A Bulgarian man with a hefty criminal record has been shot overnight in front of his apartment building in a southern district of capital Sofia.

Kiril Kirilov, aka Shkafa, was returning home in the Mladost-3 neighborhood together with his girlfriend, when attackers shot at him.

He apparently was shot in the leg while trying to run away, but attackers caught up with him and finished him off, according to eyewitness reports.

Kirilov is aged 38 and has a record of assault and battery, theft and escaper from jail.

The trial against the so-called "Impudent" group, accused of 11 abductions, was nearing its end, with sentences expected April 2.