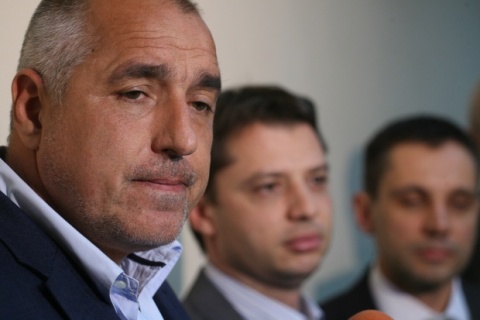 The agreement for the transfer of ownership of Bulgaria's Gorubso Madan metal mines was signed late Friday evening in the presence of PM, Boyko Borisov (l), and the new Economy and Energy Minister, Delyan Dobrev (c). Photo by BGNES

Bulgarian businessman Nikolay Valkanov is taking over the concession of the Gorubso Madan metal mines from Valentin Zahariev.

The agreement was signed late Friday evening at the Economy Ministry in the presence of Prime Minister, Boyko Borisov, and the new Economy and Energy Minister, Delyan Dobrev. Borisov personally announced the news life on the State TV BNT.

Nikolay is a former VP of Multigroup, and currently owns "Minstroy" and Gorubso Zlatograd and has a concession of the "Varba" mine. He is taking over the debts of Gorubso Madan as well, some of which are to First Investment Bank, also a bidder for the Madan concession.

The third candidate was an affiliate to the company Himiport, owned by the Varna-based group TIM.

Valkanov told journalists that the new owner of Gorubso Madan is the joint stock company "Varba Holding," which had been established 3 years ago. Dobrev explained that the concession would not be terminated and Madan mines are continuing their work, stressing this was the best possible development because miners will keep their jobs and receive their overdue wages and benefits.

Borisov explained he has asked the Governor of the Central Bank Ivan Iskrov to order employees of EIbank and DSK bank to come to work Saturday so that the salaries can finally reach the miners in Madan.

According to the PM, the amount is in the vicinity of BGN 1.2 M. He pointed out that First Investment Bank was ready to wire money immediately.

Friday was the deadline for now-former owner, Valentin Zahariev, to pay his nearly BGN 8 M debt to the National Social Security Institute, NOI. He also owes about BGN 1.5 M in wages to miners, which he promised to pay by Friday as well.

Dobrev reported earlier that the cabinet had already begun the procedure to withdraw the concession.

The miners, who have been staging protest rallies for two weeks now, asked Borisov to interfere in person to help them receive the pay owed to them.

The now dismissed Bulgarian Economy and Energy Minister, Traicho Traikov traveled to Madan to meet with the protesters and discuss their demands. Bulgarian Minister of Labor and Social Affairs Totyu Mladenov also met them and supported their call to oust Zahariev if he does not cover his responsibilities.

Before being let go, the Economy Minister announced he was planning to withdraw the concession, but pointed out that the process could last for months and during this period there would be no guarantee the workers will have a fixed income thus the parties must use all opportunities to resolve the outstanding issue.

On Tuesday of last week, Finance Minister, Simeon Djankov issued an ultimatum to the concessionaire to pay by Friday all overdue salaries, threatening that if he fails to obey, all his companies will become subject to a large-scale tax audit.

If Gorubso Madan was to declare bankruptcy, the State could only pay miners BGN 1 000 each in compensation.