Rosatom Offers Bulgaria Yet Another Extension of Belene NPP Contract 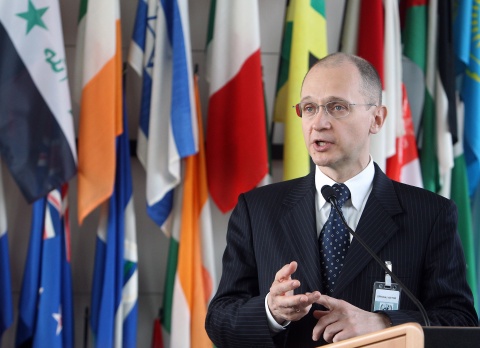 Russia's state-owned nuclear corporation Rosatom has made it clear it is ready to agree on yet another extension of the contract with the Bulgarian government for the construction of the Belene nuclear power plant.

The currently active extension of the 2006 deal between Bulgaria's National Electric Company NEK and Rosatom's subsidiary Atomstroyexport is set to expire at the end of March 2012.

"If the mutual requirements are fulfilled, we can discuss an extension but only after we receive the Bulgarian position," Rosatom CEO Sergei Kiriyenko told Interfax on Friday.

Kiriyenko stated the Russian nuclear corporation would like to know what extension Bulgaria wants, what its justification for that would be, and if Bulgaria guarantees that it will honor its commitments in a new agreement.

The Rosatom chief emphasized that "the Bulgarian partners" have not presented their offers for the future development of the Belene NPP project.

"At least once monthly the Bulgarian officials make contradictory statements in the media," he said, reiterating his statement from earlier this week that Rosatom had been tired of waiting for the Bulgarian government to make decisions on Belene project.

Kiriyenko explained that if it gives up on the NPP, Bulgaria can purchase from Atomstroyexport the nuclear reactor that it has produced for the Belene NPP.

At the same time, however, he made clear his doubts about the feasibility of installing the reactor in question at Bulgaria's only existing NPP at Kozloduy, since this could take between 5 and 7 years.

The contract between Bulgaria's National Electric Company NEK and Russia's Atomstroyexport, a subsidiary of Rosatom, was extended by the end of March 2012.

The greatest issue over which Bulgaria and Russia have been haggling for the past two years under the Borisov Cabinet has been the price of the project, with Russia insisting it should be no less than EUR 6.3 B, while Bulgaria is demanding a price of no more than EUR 5 B.

According to the non-binding memorandum expiring on March 31, 2011, Bulgaria's NEK will have a share of 51% in the Belene NPP, Rosatom – a share of 47%, Finnish company Fortum - a share of 1%, and French company Altran Technologies - a share of 1% with an option to increase it. Serbia has expressed interest in acquiring a share of 5%-10% but the talks for that have not been finalized yet.

In mid-March 2011, apparently acting on concerns caused by the situation in Japan's Fukushima NPP after the recent devastating earthquake there, the European Commission confirmed that it wants to reexamine the Belene NPP project - once Bulgaria finds an investor for it - even though it already approved it back in 2007.

In April 2011, the Bulgarian government formally signed a consulting contract with UK-based company HSBC (which won the tender in November 2010) for the financial analysis for the project for the construction of the Belene nuclear power plant. Bulgaria will be paying HSBC EUR 2 M for its services plus 0.95% of the end price of the Belene NPP if it is realized. This means that if HSBC declares the Belene NPP project to be economically feasible, and it is constructed, it will get a fee of EUR 47.5 M if the plant costs EUR 5 B.

Another important issue plaguing the Belene NPP project that surfaced in the recent week is the mutual financial claims of the two parties over sums allegedly owed for the delivery of new equipment and buyout of old equipment for the future plant, with Atomstroyexport recently filing an EUR 58 M suit against NEK with the International Arbitration Court in Paris, and NEK responding with an EUR 61 M suit in Geneva.