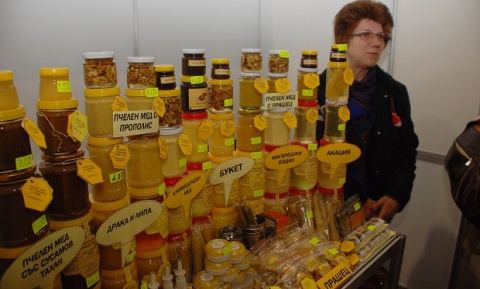 Nedyalka Mihova from Dobrich has won the "Beekeeper of the Year" award of the Dobrich agricultural fair. Photo by BGNES

Bulgarian beekeepers make between BGN 60 M and BGN 65 M per year, according to data of the Bulgarian Beekeepers' Union.

Ganev, who spoke at the opening of the 9th annual Pchelomania ("Beekeeping Mania") exhibition in the northeastern Bulgarian city of Dobrich, said that traders usually buy a kilogram of honey at BGN 4.20, and consumers pay a retail price of BGN 5.75-6, while exporters pay about EUR 2.80 per kg, as cited by BGNES.

"More and more young people are taking up beekeeping. This is a great alternative in a time when finding employment is becoming harder and harder," Ganev said.

In his words, most of the Bulgarian beekeepers have between 80 and 150 units each, but are starting to form larger cooperatives.

Ganev also said all of the EU funding – BGN 6.5 M – slated for Bulgaria's beekeeping sector for 2011 has been absorbed almost immediately.

He did complain, however, of the high bee mortality rate after the severe winter cold – with the mortality reaching between 25% and 45%, with a total of 2 000 bee families dying completely in all of Bulgaria.