Toulouse Shooter Has No Remorse as France Standoff Drags On 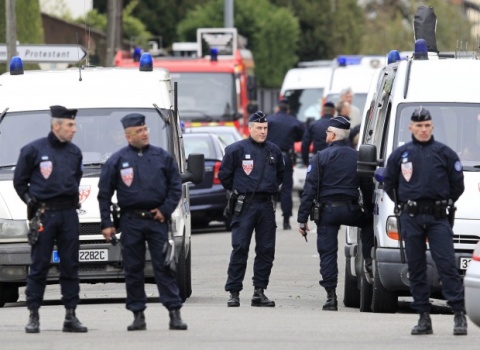 French policemen on the site during a standoff to arrest the suspect who allegedly killed children and a rabbi on 19 March 2012 at a `Ozar Hatorah` Jewish school, in Toulouse, France, 21 March 2012. EPA/BGNES

The man suspected of killing seven people in France has confessed to the crimes, a federal prosecutor said late Wednesday, as the shooter standoff has continued into the night.

The 23-year-old man of Algerian origin, however, has expressed "no regret" in talks with police negotiators.

"He has boasted about bringing France to its knees," prosectuor Francois Molins told reporters near the scene of a stand-off between the suspect and police in Toulouse, as it went into its 14th hour.

"He expresses no regret, other than that he did not have time for more victims," Molins explained, as cited by DPA.

The Frenchman of Algerian descent, identified as 23-year-old Mohamed Merah, is accused of gunning down three French soldiers and four people at a Jewish school - including three children - in attacks that have rocked the country since March 11.

Funerals for the victims were held on Wednesday, in Jerusalem and at a French military base in Montauban.

There, President Nicolas Sarkozy spoke of a 'terrorist execution,' while Foreign Minister Alain Juppe in Israel said that the killings at the Jewish school amounted to an attack 'on 65 million Frenchmen.'

Merah, who is claiming links to al-Qaeda, told negotiators that he was fueled by a wish to 'avenge Palestinian children' and protest France's overseas military operations.

Molins confirmed that Merah had planned a further attack on Wednesday, once again on a soldier. He also wanted to go after two Toulouse gendarmes in the future.

That spurred special forces to launch a raid shortly after 3 am (0200 GMT) on the five-storey apartment building where Merah was staying, in the quiet residential neighbourhood of Cote Pavee.

Merah immediately started shooting through the door, injuring two policemen. His neighbours had not been evacuated ahead of the raid so as not to tip him off.

After barricading himself alone in an apartment, Merah eventually obtained a means of communication with the police by agreeing to turn over a Colt handgun, which he threw out of a window, Interior Minister Claude Gueant said.

A Colt was used in all three attacks, police have said. But Merah also told police that he had other weapons, including a Kalashnikov rifle and an Uzi gun.

A revolver, a shotgun, an Uzi and ammunition were later recovered by police from a car Merah had rented, with the search still on for a second vehicle also believed to contain more weapons, the prosecutor said.

While Merah initiated gunfire several times throughout the morning, according to Molins, at the same time the suspect told negotiators that he would turn himself in to police in the afternoon. That was later extended to the evening.

"He has no desire to be a martyr. He prefers to remain alive," Molins said. French officials, including Sarkozy, insisted that this was their goal also, so that Merah could be tried.

"The only thing that matters is that this madman, this terrorist will be brought to justice," said Marc Sztulman, an official from the Representative Council of French Jewish Institutions.

Merah had been on the radar of France's intelligence services 'for several years' because of time he spent in Afghanistan and Pakistan, Gueant said. In 2007, he was held in a jail in southern Afghanistan, Kandahar prison director Ghulam Farooq said. Gueant insisted that there had been no indication that he would turn violent.