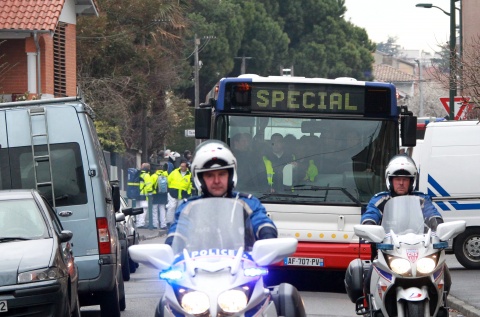 Neighbors are transfered by bus during a raid on a house to arrest suspects who allegedly killed children and a rabbi on 19 March 2012 at a `Ozar Hatorah` Jewish school, in Toulouse, France, 21 March 2012. EPA/BGNES

A report that the man suspected of being the serial killer behind the shooting of seven people in France had been arrested was swiftly denied by Interior Minister Claude Gueant Wednesday afternoon.

Earlier media reports had said the suspect had been arrested following a 12 hour-long siege by police.

President Nicolas Sarkozy was expected to address the press soon, after meeting with police officials near the apartment building were the 24-year-old suspect has been holed up since a pre-dawn raid by police, DPA reported.

The suspect had told negotiators that he would turn himself in to police in the afternoon, but there had been uncertainty over whether he would fulfill the promise amid reports that communication with the 24-year-old man had temporarily broken off.

The suspect, who is claiming links to the al-Qaeda terrorist network, is believed to have shot dead three French soldiers and four people at a Jewish school - including three children - in a series of attacks since March 11 that have shocked France.

He has told police negotiators that he acted to 'avenge Palestinian children' and has also mentioned France's overseas military operations in relation to the murders of the soldiers, according to Gueant.

The suspect, a French national with Algerian origins, had been on the radar of the country's intelligence services 'for several years' because of time he spent in Afghanistan and Pakistan, Gueant said.

He had at one time been held in a jail in southern Afghanistan, Kandahar prison director Ghulam Farooq said. He escaped in one of two jailbreaks, either in 2008 or 2011. Gueant said there had been no indication that he would turn violent.

The man obtained a means of communication with the police on Wednesday by agreeing to turn over a Colt handgun, which he threw out of a window, the minister said. A Colt was used in all three shootings, police have said.

But the suspect also told police that he had other weapons, including a Kalashnikov rifle and an Uzi gun. Gunfire was heard several times throughout the morning by journalists on the scene.

The suspect had immediately started shooting through a door when special forces launched a raid on the apartment building in the residential area of Cote Pavee shortly after 3 am (0200 GMT).

Two policemen sustained injuries to a knee and a shoulder, while a third was struck in his bullet-proof helmet. Police did not evacuate the other residents in the five-storey apartment building until about noon. Evacuations were not carried out ahead of an early morning police raid so as not to tip off the suspect - angering many of the residents and their families.

French officials said that everything had been done to ensure the suspect was arrested alive so he can stand trial.