Bulgaria Sees No Threat in Territorial 'Dispute' with Romania 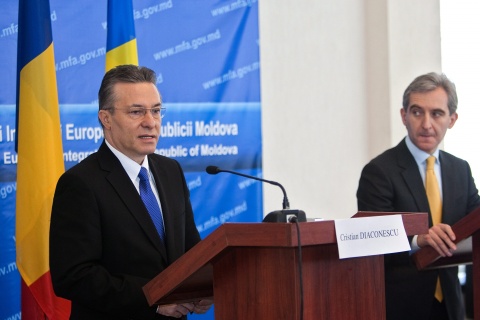 The Minister of Foreign Affairs of Romania Cristian Diaconescu talks at a joint press-conference with his Moldovan counterpart Iurie Leanca (R), during his official visit in Chisinau, Moldova, 31 January 2012. EPA/BGNES

Bulgaria expects no problems in resolving its maritime delimitation dispute with Romania, according to the country's Foreign Ministry.

Earlier on Wednesday, Romanian Foreign Minister Cristian Diaconescu drew attention to an alleged "disputed territory" on the Black Sea border between Bulgaria and Romania in an area that was recently found to be rich in oil and gas.

"The border dispute is about 17 square kilometers, which is not much, but having in mind that it concerns two European countries that cooperate to the maximum in a number of spheres and share many common interests, I do not see why these issues should not get settled very quickly," Diaconescu was quoted as saying in an interview for a Romanian TV station.

"Bulgaria and Romania have been negotiating on the delimitation of their Black Sea territories for more than 20 years now; the latest (17th) round of talks took place in December 2011 in Sofia. The next round is to take place in Bucharest this year," the Ministry has said in a statement.

"The talks have been carried out in a friendly atmosphere and within the context of both countries' wish to settle the issue by signing a bilateral agreement. The question does not constitute a problem in our bilateral relations, which are based on partnership, good neighbor policy and our common EU membership."

The Domino-1 well, which is operated by the Exxon unit, is located in the Neptun Block, 170 kilometers offshore in water about 1,000 meters deep.