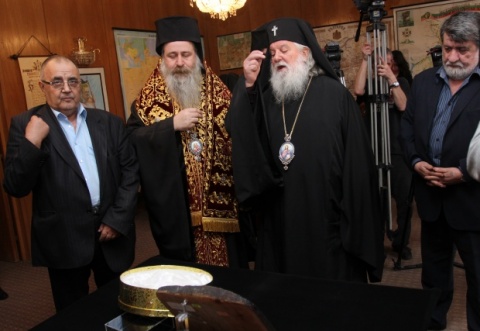 NIM Director, Bozhidar Dimitrov (l) and Culture Minister, Vezhdi Rashidov (r) at the ceremony for the bestowing of relics of St Kliment Ohridski to the Museum and PM Borisov. Photo by BGNES

Bulgarian Prime Minister, Boyko Borisov, was bestowed in absence Monday a particle of the relics of St Kliment Ohridski (of Ohrid).

The relic was presented by Bishop Sioniy. As the Prime Minister could not make it to the ceremony at the National History Museum (NIM), the gift was accepted by the Director of NIM, Bozhidar Dimitrov, the Bulgarian news agency BGNES reports.

The ceremony was attended by Culture Minister, Vezhdi Rashidov. Dimitrov apologized for the absence of the Prime Minister and Deputy Prime Minister, who was also said to be present, and explained that they were running late and would arrive later.

The relics will be kept under security in one of the main halls of the Museum. It is expected that in the summer they will be displayed for worshippers in the northeastern city of Shumen.

The idea is to build a chapel in the courtyard of NIM, where relics of all the Seven Saints (Sveti Sedmochislenitsi), who created and worked on the Bulgarian alphabet, will be collected.

Dimitrov pointed out that the Seven Saints have also translated books so that the serving of church mass can be switched from Greek to Bulgarian. He stressed that this way the language was passed to the administration.

"Bulgarian people sensed that this was a team and established the worship for all these Saints together; they sensed the work had not been done by just one person, but all seven," the NIM Director explained.

The construction of the chapel is to begin ASAP with the funding coming from donations, because, as Dimitrov stressed, "it is not right to build chapels with State money."