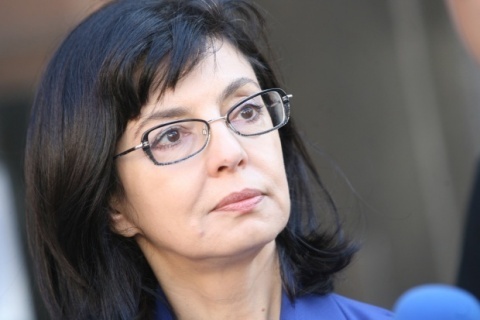 Meglena Kuneva is still abstaining from emerging as an indepedent political leader in Bulgarian politics. Photo by BGNES

Bulgaria's ex EU Commissioner Meglena Kuneva has declared she is not ready yet to turn her civic movement into a full-fledged political party.

Last week she quit her political party, the National Movement for Stability and Progress (NMSP), the party of former Bulgarian Tsar and ex PM Simeon Saxe-Coburg, a move that generated criticism, and has been interpreted as a clear sign that she wants to emerge as an independent political leader.

Speaking on Saturday, Kuneva told Darik Radio she was not convinced yet that she could fulfill people's expectations by founding a political party.

"Power is not a goal in itself. A politician must not work solely in order to remain in power," Kuneva commented.

She did make it clear, however, that if she is to run in any elections, the only way to do that would be through her own political party.

"Whether I would want to run depends on what people might want to be represented by me, and on their ideas, and on whether we can form a team together," Kuneva noted.

In her words, her civic movement is generating support across Bulgaria, especially among the people who leaning right.

"GERB doesn't rule. We are being tossed around by the sea," commented the ex EU Commissioner when asked to rate the rule of the center-right party GERB of PM Boyko Borisov.

"What's happening with healthcare, agriculture, education, public administration,  the money of the nation, what are the plans for economic and financial rescue of the state," she asked rhetorically regarding GERB's policies.