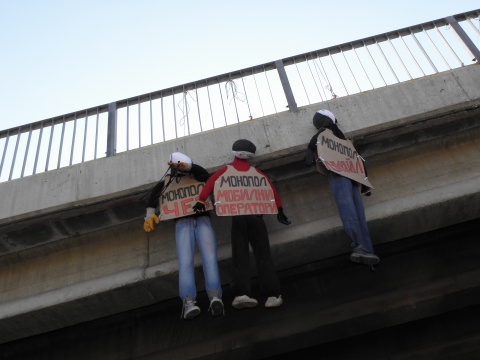 Pictured: Protesters hung effigies of monopolists during an anti-cartel protest in Bulgaria's Blagoevgrad in early March 2012. The effigies stand for the CEZ power provider, the mobile phone operators, and Lukoil. Photo by BGNES

Bulgaria's Competition Protection Commission has discovered a cartel of major gasoline and diesel suppliers, the institution announced on Friday.

According to the CPC, some of leading gas station suppliers in Bulgaria have committed violations in the sense of a price cartel agreement.

"The violation consists of a prohibited agreement and coordination practices for determining prices that in its purpose or result prevent, limit, or violate the competition on the wholesale markets of gas and diesel," the Bulgarian Competition Protection Commission declared on Friday.

The ruling issued by the CPC cannot be appealed; the gas and diesel providers are entitled to file written objections to it within 30 days, and be allowed a public hearing.

Once the objections are considered, the Bulgarian competition watchdog is to issue a final ruling, including with respect to anti-trust fines.