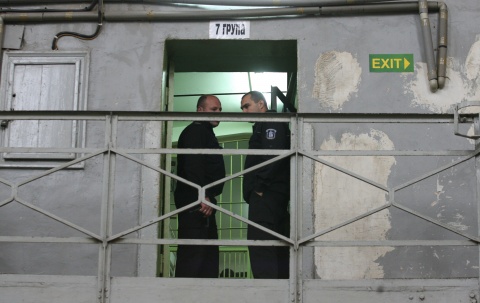 At the Bulgarian prisons visited, the CPT delegation received a number of allegations of ill-treatment by staff and of assaults against prisoners who were disruptive or disobeyed orders. Photo by Sofia Photo Agency

Bulgaria has made progress in the prevention of torture, but is still marred by allegations of ill-treatment and inter prisoner violence, according to the Council of Europe's Anti-Torture Committee.

The Council of Europe's Committee for the Prevention of Torture and Inhuman or Degrading Treatment or Punishment (CPT) published on Thursday the report on its visit to Bulgaria in October 2010 at the request of the Bulgarian authorities.

"The majority of the persons interviewed by the CPT's delegation said that they had been correctly treated by the police. Nevertheless, a considerable number of persons alleged physical ill-treatment at the time of their apprehension. In a few isolated cases, the delegation heard allegations of the infliction of electric shocks," reads the report.

The CPT welcomed an instruction aiming at setting up special police rooms equipped for making full electronic recording of questioning.

However, it also recommended that police officers are trained in acceptable interviewing techniques, the drawing up of a code of conduct of police interviews, and improvements in the screening for injuries and their reporting to the competent authorities.

At the prisons visited, the CPT delegation received a number of allegations of ill-treatment by staff and of assaults against prisoners who were disruptive or disobeyed orders. Inter-prisoner violence was rife.

The CPT considered this to be due to the combination of overcrowding with reduced prison staffing and recommended vigorous action to combat this phenomenon.

The CPT noted an increase in the number of persons held in investigation detention facilities since 2008. Further, the positive trend observed in 2006 and 2008 of a reduction in the proportion of persons held in them for long periods of time had not been maintained.

At the two psychiatric hospitals visited, the Committee concluded that inter-patient violence also occasionally occurred, and it recommended adequate staff presence and supervision to prevent it, alternative therapeutic approaches, and training of staff in handling challenging situations.

The CPT only heard allegations of ill-treatment at the forensic ward of Lovech State Psychiatric Hospital.

In their response, the Bulgarian authorities said that an internal investigation had led to the dismissal of one orderly and a warning to a security officer.