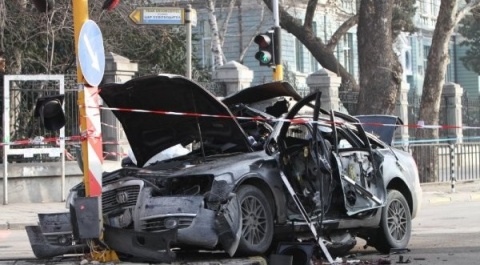 Photo of the car in which businessman Yordan Harasimov died after a bomb, placed under his car seat, exploded in downtown Varna. Photo by BGNES

Police now have suspects in the murder of businessman Yordan Harasimov, who was blown up in his car in Bulgaria's Black Sea city of Varna on February 24.

The information was reported Thursday by the Varna District Prosecutor, Vladimir Chavdarov.

He pointed out the investigation was working tirelessly, but declined offering much detail on grounds it could be impeded.

"We are expecting the expert report on the type of explosives used in the blast," said Chavdarov.

According to the Prosecutor, there are three main leads in the murder.

The first lead for the explosion is EU funding in the amount of BGN 4 M, obtained by Harasimov, for the construction of the fishery port in the city of Varna, which had hurt seriously some business interests.

After the murder, the Bulgarian "Trud" (Labor) daily wrote that the businessman told people close to him that he had "problems with individuals from the capital Sofia, who were trying to block the port project."

The second lead is a long-time conflict with a former business partner, as revealed by Interior Minister, Tsvetan Tsvetanov, and the third is personal motive.

The explosion that killed Harasimov occurred at a major downtown Varna crossroads near the Varna University of Economics shortly after 8 am. The bomb was placed under his car seat. He died shortly after the blast in the Saint Anna hospital in the city.