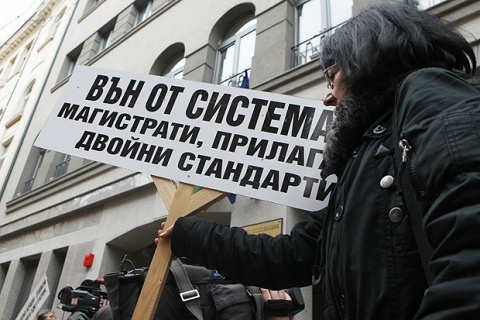 A number of people who say they were victimized by greedy judiciary protested in downtown Sofia against corruption in the judicial system in Bulgaria. Photo by Sofia Photo Agency

The start of the important Thursday meeting of Bulgaria's Supreme Judicial Council, VSS, began with a protest rally.

Scores of people have gathered in front of the central Court building in downtown Sofia, holding signs reading "The Prosecution Is Slave of the Mafia," "Kick out of the System Magistrates Who Commit Property Fraud," "The Prosecution Serves Thieves of EU Funds," and demanding a meeting with Chief Prosecutor, Boris Velchev.

The demonstrators insist they fell pray of property fraud and have erected a tent as a symbol of the latter. They say that their diagnosis of "awake coma of the judiciary" had been proven by the latest European Commission report under the Cooperation and Verification Mechanism and the public must ask for immediate dismissals and resignations of magistrates and prosecutors.

The rally has been organized by the Bulgarian Anti-mafia Movement.

Velchev told the demonstrators upon his arrival that it was impossible to examine their complaints right away and invited them to talks at his office after the VSS meeting.

The selections had already been postponed once because during the previous vote no one was able to collect the required 13 ballots.