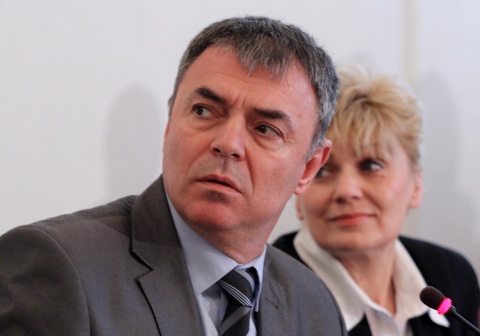 Education Minister Sergey Ignatov has said that it is beyond his capacity to impose a ban on chalga music in schools. Photo by BGNES

Asked to comment on a video showing uniformed junior students dancing to a song of the scandalous Roma pop-folk singer Azis, Education Minister Sergey Ignatov has said that it is beyond his power to ban chalga in schools.

The video, which shortly went viral thanks to youtube and social networks, is part of a reportage of Radio Vidin, the local program of the Bulgarian National Radio, on March 8 celebrations in Vidin.

To congratulate the women working at the municipal administration and the regional education inspectorate, the children from the "Zvanche" ("Bell") kindergarten and the "Sofronii Vrachanski" elementary school in the northwestern city of Vidin performed a dance show.

Part of the dance routines were played to a song of Azis, chalga singer and an eminent cross-dresser.

"Is this singer banned by some authority? By the Council for Electronic Media (SEM), for instance? If I introduce a ban on playing his songs in schools in my capacity as an Education Minister, we shall be held liable for discrimination. If I don't, I shall also face accusations. This is why other institutions need to come up with a pronouncement. That said, my opinion is that appropriate pieces of music should be chosen considering the age of the children," Ignatov told journalists on Wednesday.

The Education Minister specified that he had ordered an inspection into the matter.

The choreographer of the controversial dace, Metodi Filchev, insisted that there was nothing wrong about the March 8 greeting, adding that he had selected the song of Azis.

In a Tuesday interview for Darik radio, he reasoned that Azis was a world-famous star and that there was nothing scandalous about his outlook.

"The kids like this, and it is me who decides what they dance to," the choreographer snapped.

"If I decide to put together a dance routine to a song of Sofi Marinova, who will represent Bulgaria in Baku, will I also stand accused," Filchev asked.

Asked why he had picked a song of Azis and if the parents had found it disturbing, he

"I speak normal Bulgarian. I shall not take into account a group that is willing to stir ethnic tensions. Let them read the strategies of the National Council – get this down and publish it the requirements of the European Union – the integration of minorities can only be achieved through education and cultures. Out of a total of 550 children in school, 520 were in attendance, and 150 danced to what they like. Is it better to leave them do drugs or engage in prostitution? This is what they enjoy. I am the director and it is me who decides! When Arabesk Ballet danced to this piece of music in Slavi's Show, why was there no scandal? The scandal flared up when Roma children danced to the tune. I do not really see what the scandal is about," Filchev told journalists.