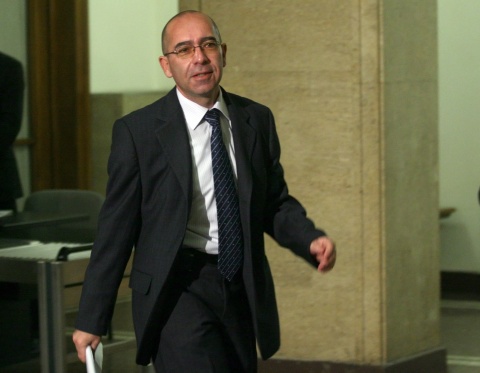 If asked to resign, Stefan Konstantinov will be the third Health Minister in the GERB cabinet to call it quits. Photo by BGNES

The Members of the Parliament from the ruling Citizens for European Development of Bulgaria party, GERB, are ready with their nomination for Head of the National Insurance Fund, NZOK.

Kalina Pencheva, who leads the Medication Products unit of NZOK, will be nominated as the Fund's Head before Prime Minister, Boyko Borisov, the Bulgarian Standard daily reports Wednesday.

The former Head of NZOK, Neli Nesheva, recently parted with her posts after it emerged that she has received huge bonuses in the amount of BGN thousands.

Pencheva had worked at the Fund since 2010. Prior to that she had been employed by the Alfarma pharmaceutical company. GERB MEPs have also checked her for possible connections with the former Communist State Security, DS, Standard writes, adding that GERB have been also asked to seek candidates for the Health Minister's post.

Current Bulgarian Health Minister, Stefan Konstantinov, has already been warned by Borisov that he could be ousted. The PM is expected to make the decision Friday, upon returning from his official visit to Qatar.

Konstantinov will be the third Health Minister in the GERB cabinet to call it quits if the above report materializes. He will be most likely replaced by a manager, and not another physician.

Meanwhile, Dr. Stefan Raychinov, who was just reelected Chairman of the Bulgarian Doctors Union, told the State TV BNT that he had received an offer to become Health Minister, but declined because he didn't feel competent enough.

Raychinov said it had already become crystal clear that Bulgarian medical professionals cannot work with Konstantinov, who had been totally in the dark regarding prices of medications.

The scandal around the Minister flared after it emerged that NZOK had paid BGN 6 M more for medications in 2011, compared to 2010, when the signing of the contracts was under the authority of the Health Ministry. Some of the medications had a price that skyrocketed 10 or more times in 2011.

Konstantinov insists he did not know about the above issue and was guilty only of overly trusting his now-dismissed Deputy, Gergana Pavlova, who was in charge of the medication policy of the institution.