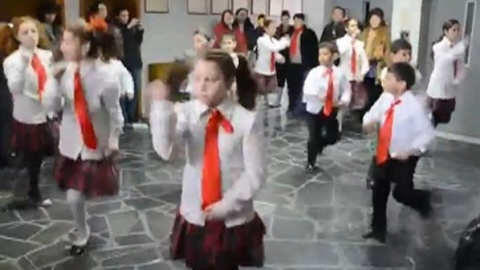 The video, which shortly went viral thanks to youtube and social networks, is part of a reportage of Radio Vidin, the local program of the Bulgarian National Radio, on March 8 celebrations in Vidin.

To congratulate the women working at the municipal administration and the regional education inspectorate, the children from the "Zvanche" ("Bell") kindergarten and the Sofronii Vrachanski elementary school in the northwestern city of Vidin performed a dance show.

Part of the dance routines were played to a song of chalga singer and eminent cross-dresser Azis.

"I decide what the children dance to! If they like Azis, they will dance to his songs," said Metodi Filchev, choreographer of the dance, in an interview for Darik radio on Tuesday.

"Everybody was thrilled with the dance," Filchev boasted, adding that the municipal officials had thanked the kids heartily and had given them sweets.

"What is this scandal with Azis' music? The children dance to whatever they like. Is it better to leave them to do drugs and engage in prostitution? This is what they enjoy. I am the director and it is me who decides! The whole neighborhood has been stirred and there will be a strike in front of the municipality tomorrow," the choreographer said in his defense.

"Besides, Azis is world famous, he represents Bulgaria. If I decide to put together a dance routine to a song of Sofi Marinova, who will represent Bulgaria in Baku, will I also stand accused," Filchev asked.

On February 29, Roma pop folk singer Sofi Marinova was chosen to represent Bulgaria at the 2012 edition of the Eurovision Song Contest after winning 700 short text messages and a total of 12 points in favor.

The nomination was met with strong negative feedback from the anti-chalga community online.

As part of the explanations offered on Tuesday, Filchev promised that the children would repeat the dance on stage to the very same song on Friday.

Asked to comment on the matter, Glavcho Petrov, Deputy Director of the Sofronii Vrachanski elementary school, told journalists of Capital daily that the entire dance show had lasted 15 minutes, and the Azis tune had only been one part of it.

Petrov explained that the show was titled "Breaktime" and was aimed at presenting different aspects of the students' leisure time after classes.