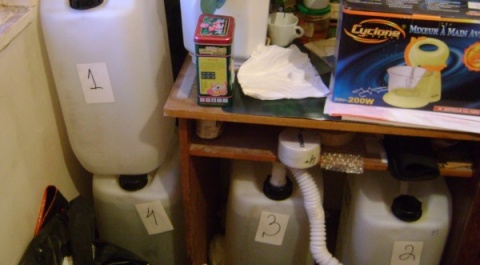 Bulgarian Customs Agency have found and seized in a special operation 62 liters of the GBL narcotic substance, known as "liquid ecstasy."

This is the third international channel for illegal drugs trafficking bust by the Customs at Sofia International Airport in the last month.

The operation had started on March 7, after the authorities seized 10 shipments with a total weight of 5.5 liters of GBL in a truck travelling to Germany.

The shipment was ordered through a Bulgarian internet site, owned by a company officially selling cleaners to German and UK customers.

Customs officials launched then pre-trial proceedings, reported the case to prosecutors, and began monitoring the business owner and several addresses.

On March 9, 2012, the company's owner was detained while shipping three other items abroad at an express courier service.

Two premises, owned by the company, were immediately raided. Authorities found at one of the said addresses - an apartment in Sofia - a home-type laboratory for bottling and packaging of liquid drugs and 55 liters of GBL, plastic bottles, labels, and a computer with emails directly implicating the owner in drug manufacturing and international drug trafficking.

According to initial information, the channel operated for nearly 8 months.

The operation was carried out jointly with the Narcotics Department of Bulgaria's Main Directorate for Combatting Organized Crime, GDBOP, the German Customs criminal investigators, ZKA, and DEA Bulgaria.