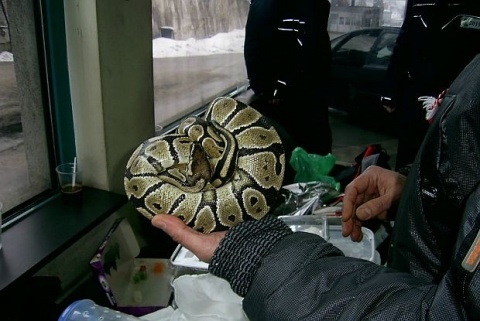 An illegal shipment containing a diverse array of reptiles was detained on a bus at the Kalotina border crossing point. Photo by BGNES

An illegal shipment containing a diverse array of reptiles was detained on a bus travelling from the Czech Republic to Bulgaria.

A total of six monitor lizards, three caimans, three pythons, 15 chameleons, 49 tortoises, one scorpion, six crabs, 10 snails and a number of cockroaches and worms were found during an inspection of the vehicle at the Kalotina border crossing point at 6.45 a.m. on Monday, the Customs Agency said in a statement.

The live reptiles had been stuffed in bags in the bus' luggage compartment.

The customs inspection revealed that a Bulgarian citizen had tried to smuggle the reptiles into the country without declaring them.

The offender had also failed to get permission for the special shipment from the customs authorities.