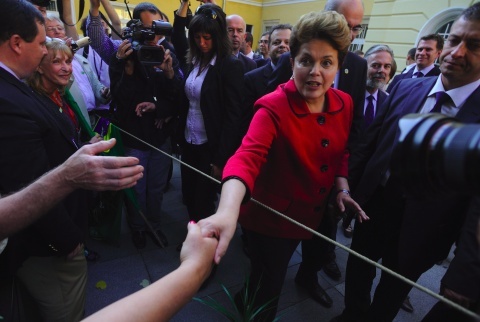 Dilma Rousseff, pictured here during her visit to Bulgaria at the beginning of October last year, has become one of the very few politicians, whom Bulgarians endearingly call by their first name. Photo by EPA/BGNES

The government of Brazil will donate on Monday funds for the reconstruction of southern Bulgarian village of Biser, which was devastated by a flood early February.

Heavy snowfall, combined with snow melting in previous days caused the bursting of the Ivanovo dam, which sent a floodwave to Biser downstream.

Brazil has reacted to the tragedy, which killed ten people, and left many houses in the area demolished.

Monday at an official ceremony at the Bulgarian Red Cross headquarters in Sofia, Brazilian ambassador to Bulgaria Washington Luis Perreira de Sousa will present a donation of USD 50,000 for the reconstruction of Biser.

The Brazilian government has presented its condolences to the families of those who died, and has expressed its hopes for swift reconstruction of the area.

Relations between the two countries received a boost after the election of Dilma Rousseff, who is of Bulgarian descent, and the excitement over her visit to the country, where her father was born, at the beginning of October last year.