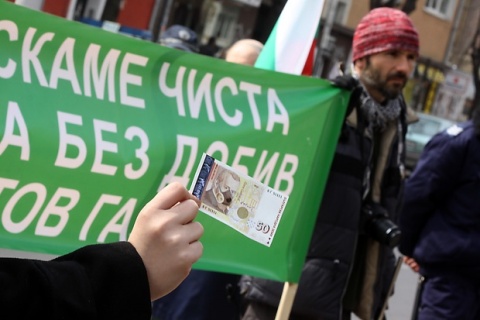 Bulgarian environmentalists handed out fake BGN 50 bills during their latest anti-shale gas rally in sign of outrage about claims they are being paid to demonstrate. Photo by Nadya Kotseva, Sofia Photo Agency

Scores of Bulgarian environmentalists gathered in downtown Sofia Saturday to protest against potential shale gas research and exploration in the country.

The activists demonstrated holding numerous signs under the sounds of music, shouting and handing out informational brochures to passerby.

They are demanding new legislation to be adopted, tackling all exploration activities, including a law regulating concessions, since they believe the current legislation leaves the door wide open for robbing Bulgaria of its natural resources. They also reiterated opposition to the hydrofracking technology and demanded to be included in preparing the new law. Their representatives told the media they were promised to be invited to join the parliamentary committees working on this legislation, but no one has gotten in touch with them.

In response to reports and claims they are being paid to demonstrate, the environmentalists handed out fake BGN 50 bills.

The NGOs have collected 51 151 signatures against shale gas and have submitted them in the Parliament, waiting for response from its Speaker, Tsetska Tsacheva and from Prime Minister, Boyko Borisov.

One of their leaders informed that a Russian company is preparing to drill for gas in Bulgaria, near the village of Rogozina and the activists suspect it will involve exploration of unconventional gas, including shale gas.

The environmentalists have decided to stage the new protest after Economy and Energy Minister Traicho Traikov announced the formation of a consultative committee on shale gas without including representatives of their civic initiative or scientists.

In January, following a wave of environmental protests, the Bulgarian government revoked a shale gas exploration permit granted to US energy giant Chevron for deposits in northeastern Bulgaria, citing the insufficient proof of the environmental safety of hydraulic fracturing. The decision followed a wave of protests organized by environmentalists and citizens across the country.

On January 18, the Cabinet imposed an indefinite ban on hydraulic fracturing, a method which involves injecting a mix of water, sand and chemicals at very high pressure deep underground to crack rock and release oil and gas.