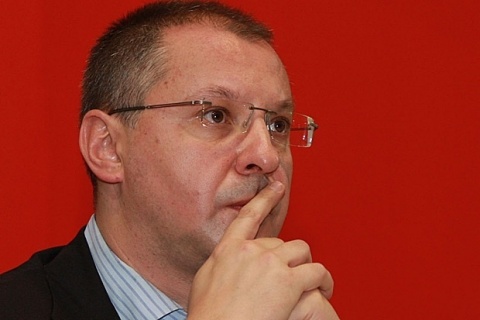 Former Bulgarian PM and current socialist leader Sergey Stanishev has a role in the corruption scandal. Photo by BGNES

The scandal with Austrian lobbyist Peter Hochegger, who is said to have bribed Austrian politicians with money received from Bulgaria, has stirred controversies in both countries.

In 2008, Hochegger's PR agency was hired by the Three-way Coalition government to hold a one-year promotional campaign to boost Bulgaria's image in the EU.

It turned out later that EUR 100 000 of sum had been transferred to former Austrian Interior Minister Ernst Strasser as a fee.

The contract between Bulgaria and Hochegger's firm, however, does not mention the name of Strasser.

The reports sent by Hochegger to the Stanishev Cabinet on a regular basis do not contain any information about services rendered by the former Interior Minister that could explain the fee, Austrian daily Die Presse notes.

In an interview for Capital weekly, former Prime Minister Sergey Stanishev says that he has never met Strasser and has no idea about his role in the execution of the public procurement contract.

"Mr. Hochegger had a foreign customer who had a problem. I helped so that the problem could be resolved," Strasser told Austrian investigative authorities, without specifying the type of assistance and the name of the foreign customer.

The Austrian daily also draws attention to other irregularities in the contract with the previous Three-Way Coalition government.

The Bulgarian subcontractor is listed as Active Group, a PR Agency owned by Monika Yanova, the live-in girlfriend of former Prime Minister Stanishev, who is already a mother of his child.

The logistics and the promotional events under the contract with Hochegger passed through Active Group.

Yanova's name is involved in a similar scenario which takes places in 2006.

The Stanishev Cabinet hired Hochegger's firm to brush up the image of Bulgaria's economy abroad, the subcontractor being once again Yanova's company.

Active Group was chosen as a subcontractor without a public tender.

The competitive process was sidestepped through the following scheme: the contractor was listed as a company subordinate to the Economy Ministry, rather than the Ministry itself.