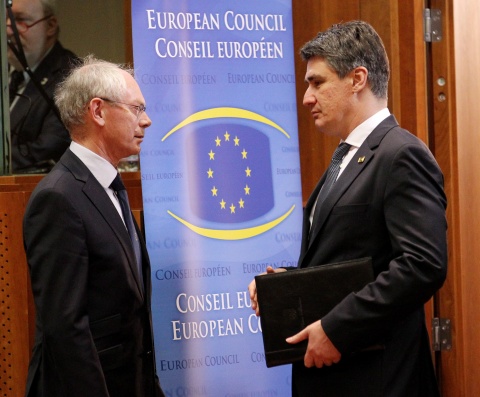 New Prime Minister of Croatia Zoran Milanovic (R) and President of the European Council, Belgian, Herman Van Rompuy (L) at the start of the EU head of states summit at the Europeancouncil headquaters , in Brussels, Belgium 01 March 2012. EPA/BGNES

Croatia's MPs have unanimously ratified the country's accession treaty with the European Union, paving the way for the country to join the bloc next year as planned.

All 136 lawmakers in voted in favor of the accession on Friday during a special parliamentary session attended by government officials and foreign diplomats.

Prime Minister Zoran Milanovic addressed the MPs before the vote, declaring that the EU was "a means to achieve a better and more secure life for our citizens."

Croatia will become a full member in July 2013, provided all the current members approve its entry. The process of ratification by all member states should be completed by June 30 2013.

The accession treaty for Croatia was signed at the European Council last December and mandates that if it is ratified by all parties, Croatia will become an EU member in July 2013.