Calls in Bulgaria for Suspension of Shale Gas Moratorium 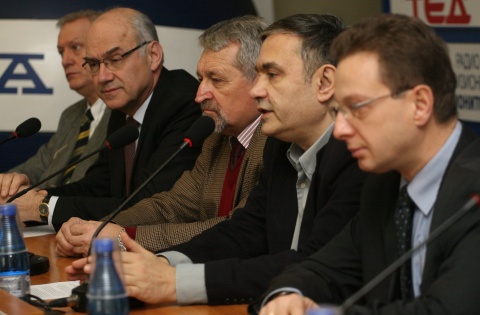 Members of the Movement for Energy Independence (DEN) have called for a cancellation of the moratorium on shale gas development in Bulgaria. Photo by BGNES

Members of the newly established Movement for Energy Independence (DEN) have called for a cancellation of the moratorium on shale gas development in Bulgaria.

Speaking at a Friday press conference, Mihail Mihaylov, MP from the right-wing Blue Coalition, said that a proposal for forming a special commission on shale gas issues would be submitted to Parliament on Wednesday.

"Although the project was submitted to Parliament 20 days ago, nobody has paid attention to it," Mihaylov added.

He pointed out that Bulgaria had to do everything possible to study its energy resources and the lack of a debate on the matter was quite peculiar.

The right-wing MP explained that the current ban on shale gas exploration and production through hydraulic fracturing was also barring exploration for conventional raw materials.

Ognyan Minchev, Director of the Institute for Regional and International Studies, said that Gazprom was "putting cheese in the mousetrap" by leaving opportunities for negotiations for lowering prices of natural gas.

Minchev was adamant that Bulgaria should not sign any documents on the South Stream gas pipeline project before the entry into force of the EU's Third Energy Package.

Dimitar Ivanov, leader of DEN, argued that electricity generated from natural gas could be cheaper than the electricity produced in nuclear power plants.

"In order for this to happen, however, Bulgaria needs to walk the tough road of energy independence and diversification," Ivanov remarked.

Ivanov insisted that Bulgaria had to immediately renew work on the construction of the gas grid interconnections with Turkey, Romania and Greece.

He explained that the current ban on shale gas exploration and production through hydraulic fracturing was also barring exploration for conventional raw materials.

They said that Bulgaria would be made to buy more gas than it actually consumed and would be deprived of any opportunities for energy diversification.

DEN's representatives called for an immediate suspension of all activities surrounding the construction of the Belene NPP, adding that "Belene is a job for the prosecuting authority at the current stage".

The energy experts demanded a meeting with President Rosen Plevneliev, voicing expectations that the discussion would pave the way for a serious public debate on energy issues.