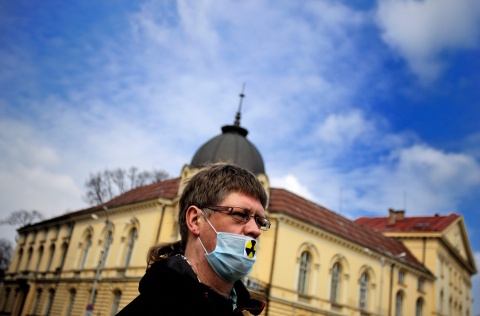 A man with a mask carrying the commonly known symbol for radioactivity joins a demonstration in Sofia, Bulgaria, 09 March 2012. EPA/BGNES

Members of several environmental organizations gathered in Bulgaria's capital Sofia for a silent protest to mark the upcoming first anniversary of the Fukushima nuclear disaster.

The environmentalists gathered in front of the country's Ministry of Economy, Energy and Tourism, stating that nucleart energy is dangerous and that the Bulgarian government should focus on developing renewable energy instead.

"We do not need Belene, neither do we need nuclear energy," a protester has told dariknews.bg, referring to the Belene nuclear power plant project that could be pootentially fulfilled.

"The alternative is renewable energy, which is many times safer and causes extremely little damage – and which would allow us to achieve something vital: energy independence for the country and for households.

Bulgaria has been haggling with Russia's state corporation Rosatom and its subsidiary Atomstroyexport for the price of the 2000 MW Belene NPP – and for other issues – for years.

After it was first started in the 1980s, the construction of Bulgaria's second nuclear power plant at Belene on the Danube was stopped in the early 1990s over lack of money and environmental protests. In 2008, former Prime Minister Sergey Stanishev gave a formal restart of the building of Belene.

The Fukushima Daiichi Nuclear Power Station in Japan was struck by the 11 March 2011 magnitude-9 earthquake and resulting tsunami, which knocked out power and was leading to the failure of its cooling systems. After fires and explosions, large amounts of radioactivity were spewed into the environment.