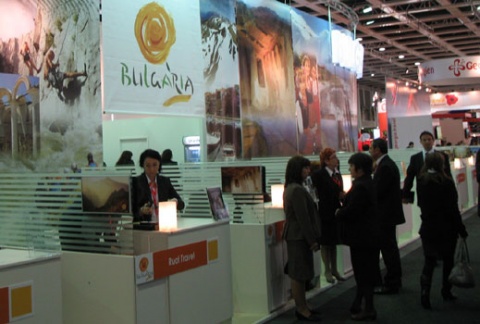 Bulgaria's participation in the ITB Berlin 2012 expo will be under the motto "The Unknown Bulgaria". Photo by money.bg

The Ministry of Economy, Energy and Tourism, which organizes Bulgaria's participation in the ITB exhibition in Berlin from 7-11 March, will present the country as "The Unknown Bulgaria".

Bulgaria will be represented at a 423 sq m pavilion through 42 tourist companies and municipalities.

The focus of Bulgaria's participation will be on the presentation of the latest developments in balneology, SPA and wellness and cultural tourism and the promotion of the EDEN ("European Destinations of Excellence") destinations.

In the course of the exhibition, Bulgaria's Deputy Minister of Economy, Energy and Tourism Ivaylo Marinov will attend a Silk Road Ministers meeting organized by the UN World Tourism Organization (UNWTO) and will meet with Ernst Burgbacher, Parliamentary State Secretary at the German Federal Ministry of Economics and Technology.

The schedule of ITB Berlin 2012 also includes a special press conference on Bulgaria which will take place at the ICC Congress Center in Berlin on March 08.

A joint press conference with Romania on the possibilities for development and cooperation in the implementation of the EU Strategy for the Danube Region will also be held on March 08.

Bulgaria and Romania are coordinators on priority axis 3 of the strategy which aims to promote tourism and multicultural dialogue.

ITB Berlin is the world's largest tourism fair held each year in March in Berlin.

ITB Berlin 2012 is expected to bring together over 11 000 exhibiting companies and organisations from more than 180 countries.