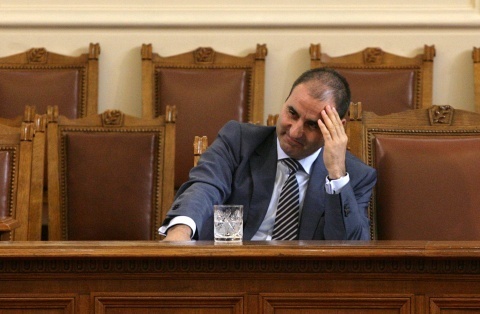 Deputy and Interior Minister, Tsvetan Tsvetanov, announced that senior officials in Bulgaria now have until Wednesday to return the bonuses they have received. Photo by BGNES

Bulgarian Prime Minister, Boyko Borisov, has extended to Wednesday the deadline for ministers, their deputies, heads of political cabinets, regional governors and their deputies to return or donate all bonuses they have received

The news was reported in the Parliament on Monday by Borisov's Deputy and Interior Minister, Tsvetan Tsvetanov.

"In the last days the PM and I have been talking about this issue and he extended the deadline. I am certain that all colleagues will voluntarily return the money.

After the cabinet's press center published the short-hand notes of the Wednesday Council of Ministers meeting Saturday, it emerged that beginning Monday, Tsvetanov will be proposing changes in the structure of the cabinet if it is established that there are senior officials, who failed to return bonuses received in the last two years.

During the meeting, Prime Minister, Boyko Borisov, had explained that until Friday, the task of calculating and collecting these bonuses is assigned to his other Deputy, Finance Minister, Simeon Djankov, while with the start of the new week Tsvetanov will be the one to plan the said changes.

"In this case, you have until Friday to deal with the "good" Djankov, otherwise on Monday the "bad" Tsvetanov will step forward," the PM had declared.

The Finance Ministry was supposed to announce by the end of the workday Friday how much money had been transferred to the special account opened by Djankov for the return of the bonuses, however, such announcement was not made.

Instead, at the last moment it was decided to first analyze "the action" for the return of the bonuses at the next meeting of the cabinet and disclose the results after it.

Meanwhile, in a Monday interview for the private bTV channel, Borisov's Chief of Staff, Rumyana Bachvarova, declared that all Bulgarian officials on political positions have returned the first part of the bonuses they received in 2011.

An official announcement on how many officials have given up on their bonuses will be released after Wednesday's Council of Ministers sitting, Bachvarova clarified during the interview.

The bonus scandal flared when it was revealed that senior officials are pocketing huge for Bulgarian standards bonuses while their regular wages are more than modest, and Borisov's ruling Citizens for European Development of Bulgaria party, GERB, and the opposition began exchanging mutual accusations of who has gotten what and more.