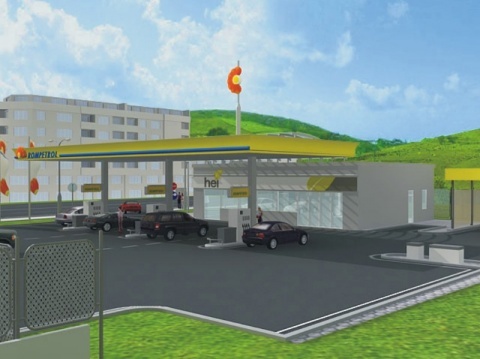 Rompetrol plans to have 70 gas stations in Bulgaria by the summer of 2012. Photo from archconproject.bg

The Romanian oil company Rompetrol is opening ten new gas stations in Bulgaria by the end of April, 2012.

The news was reported Monday by the company's press office.

With the new gas stations, there total number in Bulgaria will grow to 70.

According to Rompetrol's management, there is increased interest from owners of smaller, independent gas stations in Bulgaria (the so-called "white" stations, which are not part of the large chains) to join the Romanian business as franchise partners, meaning its network in the country could expand even further.

"The share of independent gas stations is about 70% of all gas stations. In order to operate according to amendments in Bulgarian legislation, smaller fuel merchants need to be in partnership with the large chains. We expect a significant market movement and promise that Rompetrol is ready to react and work under the new conditions," says the Commercial Director of Rompetrol Bulgaria, Stanimir Smilkov, cited by the Bulgarian Dnevnik daily.

The company's goal is to reach an 8% share of the gas retail market in the country in the next several years.