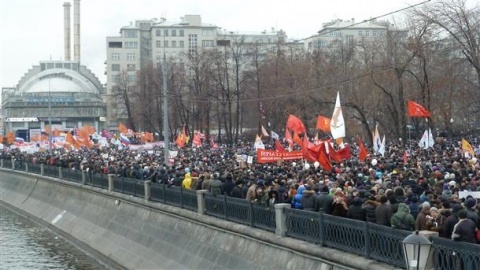 About 100 000 anti-Putin protesters are reported in Moscow on February 4 along with another 100 000 at a pro-Putin rally. Photo by, Vasko Mihalylov, BNR correspondent.

An oppositional demonstration has been planned for Monday evening in Moscow's Pushkin Square in the wake of Prime Minister Vladimir Putin's election win.

Some 12,000 police and troops will be on duty to maintain order in Moscow, according to the Russian Interior Ministry.

Meanwhile, RIA Novosti informs that two mass rallies by Putin's supporters are scheduled for Monday, the first one on Moscow's Manezhnaya Square expected to bring together as many as 20,000 people.

On Monday, Russia's electoral commission said that with 98% of the votes counted, Putin won 64%, enough to give him a first-round victory over nearest rival Gennady Zyuganov, who polled about 17%

The other three candidates were in single digits.